There was a long list of things stacking up for a blog.  I was going to write about the boys of course, I was going to write about their antics and report on the various routines.  One of the more important aspects of Alpaca ownership isn't the direct husbandry though, it is that you have to become a acquainted with the basics of pasture management.  I was going to talk about efforts towards drainage, weed control, re-seeding needs, and the rest.  I may still get round to some of that but I am going to tell the tale backwards.

So, in reverse order.

Dougal is on the mend. He wasn't a happy chap a few days ago.  We had noticed he had gone off his hard food.  This isn't all that much of a concern with him.  For starters he just isn't that bothered really. To tempt him a merest sprinkle of 'Carrs dust' on his Camelibra can make the difference.  Don't try to Google 'Carrs dust' - it's the scrapings out of the bottom of the bag of Carrs coarse camelid mix we use over winter.  We feed the 'little' boys separately from Fin and the gang as there is a chance Fin would gobble everyone's food.  However, Hamish, who can't really be described as a 'little' boy anymore now often tries to muscle in on Dougal's breakfast.  Dougie, not being all that bothered anyway will sometimes just defer and go and munch a bit of hay.  Not to worry - missing a bit of hard food isn't the worst thing when the grass is growing.

But then we noticed him laying down a lot more than normal.  Over a few days this got worse. 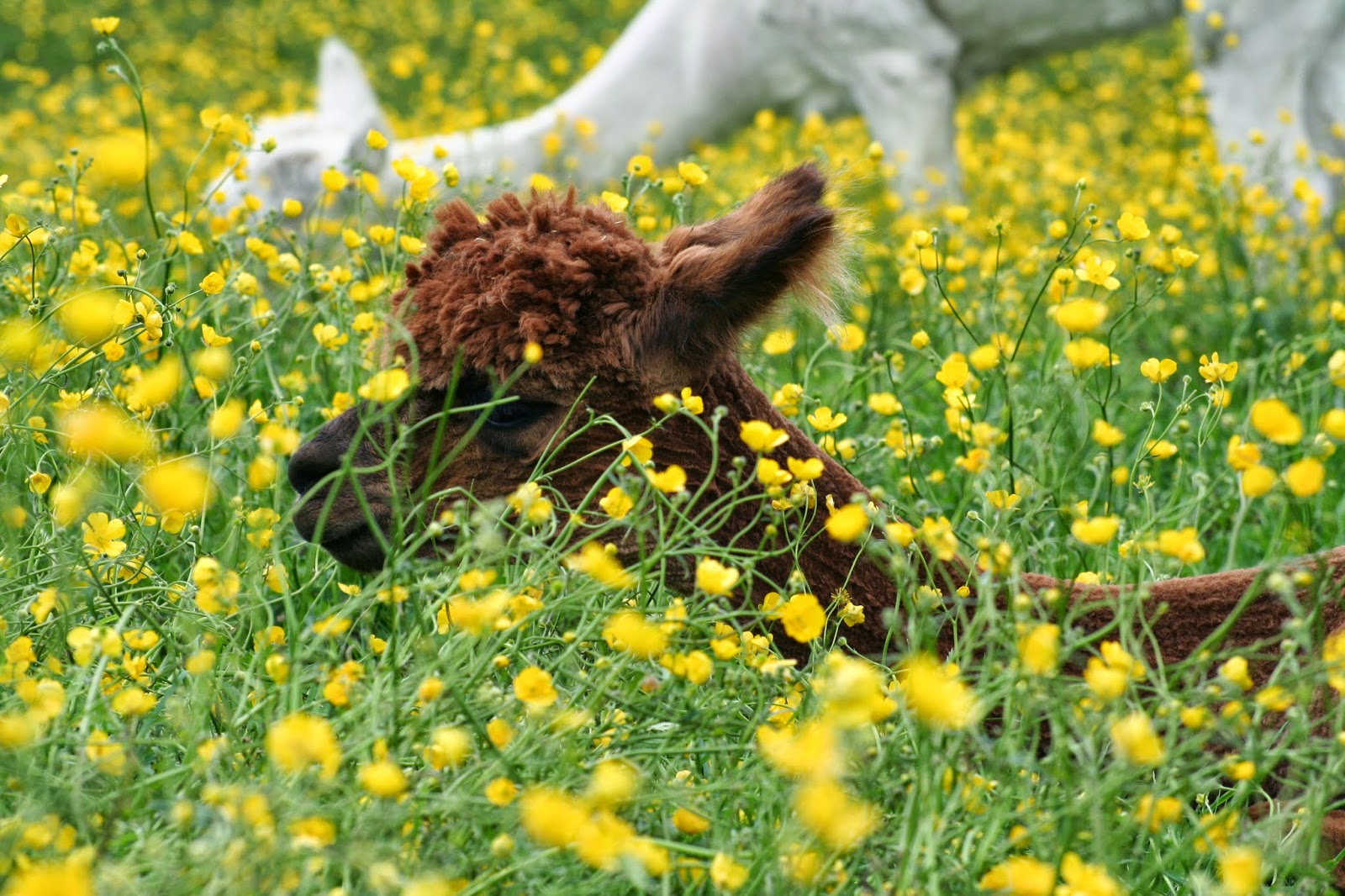 The classic signs of a off colour Alpaca were obvious.  Isolating from the heard, lethargy, increased humming.  We checked on the routine medications, fluke - check , Worms - check , AD&E - coming up , but not overdue. Lambivac - not yet,  Mineral supplement - perhaps a week or so late.  We dosed the whole heard with 5ml of 'Maxigrow'.  This worked like a magic tonic last time Dougal was like this - We fully expected him to react the same.  But no, progressively getting worse.

He has had a few stressful episodes of late.  Keeping up the with the reverse order of this blog.  We had Hamish and Dougal castrated a few months back.  But recovery was rapid and healing unproblematic.  Shearing came next, just before we noticed Dougal change.  He did spit and wriggle and wee himself but there was nothing we could pin down as unusual and he was right as rain straight after, sniffing Hamish's arm pit to make sure who was who. 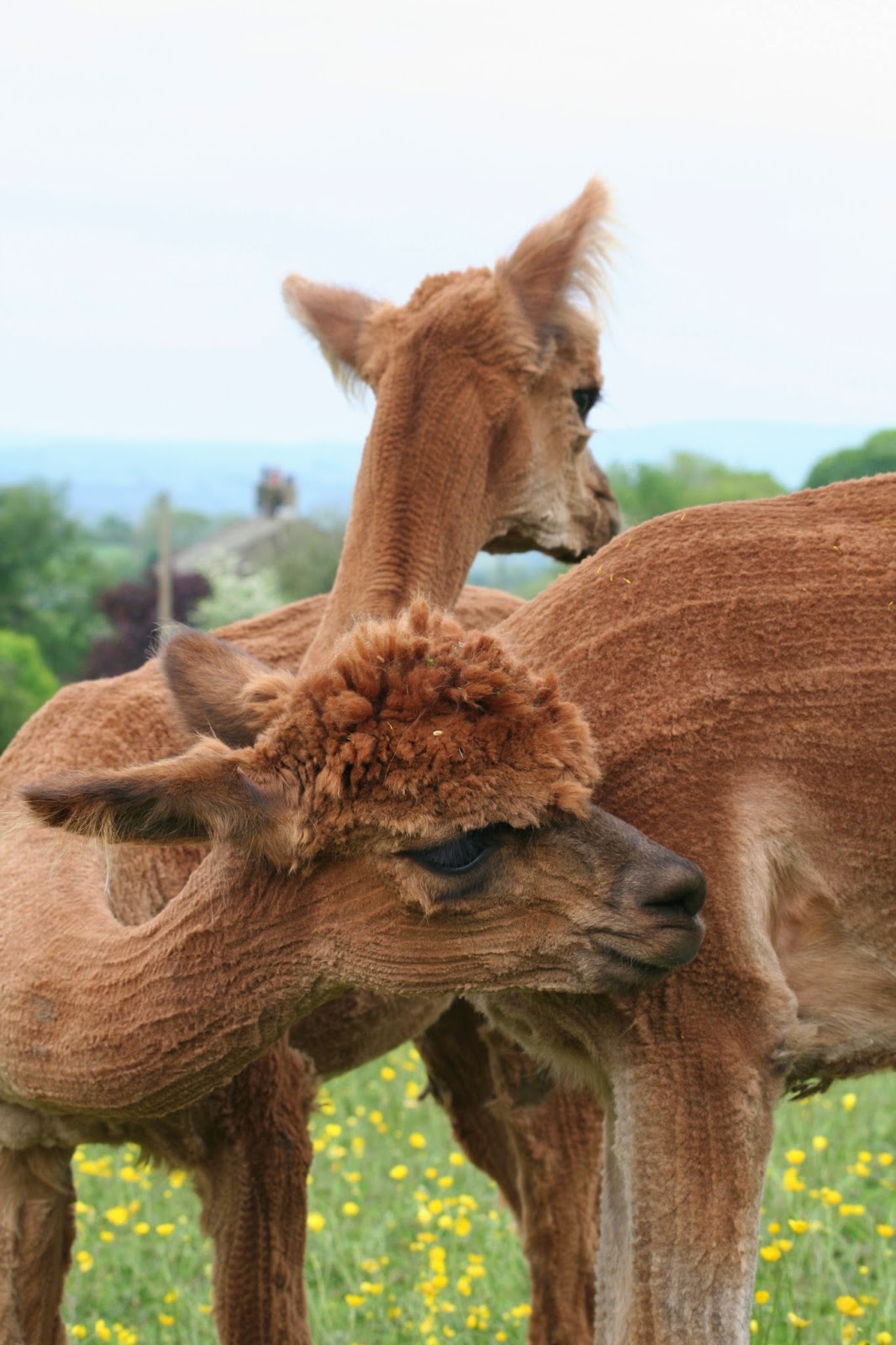 Soon after shearing we had turned the boys out onto the big paddock. They had been kept out of this for some time while we had been 'improving'.  This has started with muck spreading.  An event that provided amusement and disgust in equal measure from our city-slicker house guests at the time!  Muck spreading was followed by harrowing, seeding and fertilizer spreading. Ted the Fergie has been in much use !

When all that had settled down I tackled the buttercups that have started to take over. I suspect our regime of topping and leaving the cuttings on the field may not help this.  Last year I tried to cover over an acre with a knapsack sprayer.  This resulted in some slightly under the weather buttercups and some impressive shoulder bruises from lugging 20 liters of the stuff around.  This year war was declared.  I rigged up a boom sprayer out of found and borrowed items (The farmers quadbike sprayer, a bit of angle iron, a car battery, a suitably industrial grade, over specified control box of my own design and manufacture.

This sounds simple enough but like all things agricultural, scratch the surface and you are in a world of complexity.  Dilution, coverage, droplet size, boom height , spray angle, flow rate, tank pressure, drift rate and last but not least. the speed of travel.  I could work out all the above but getting the Fergie to traverse the field at a constant speed and remember to switch off the boom pump before slowing down for a turn was another matter.  This had ended up with me putting a heaver dose of the stuff (Headland Relay-P) down than I had planned.

Oh no! Could this be the cause of Dougal's malady?  Had he got worse since being on the new paddock? This should not have been an issue as we waited for over the two weeks advisory, we had had some exceptionally heavy rain  and  I was sure to keep away from the fences for obvious reasons.  But it was a possibility and one I would not want to live with. 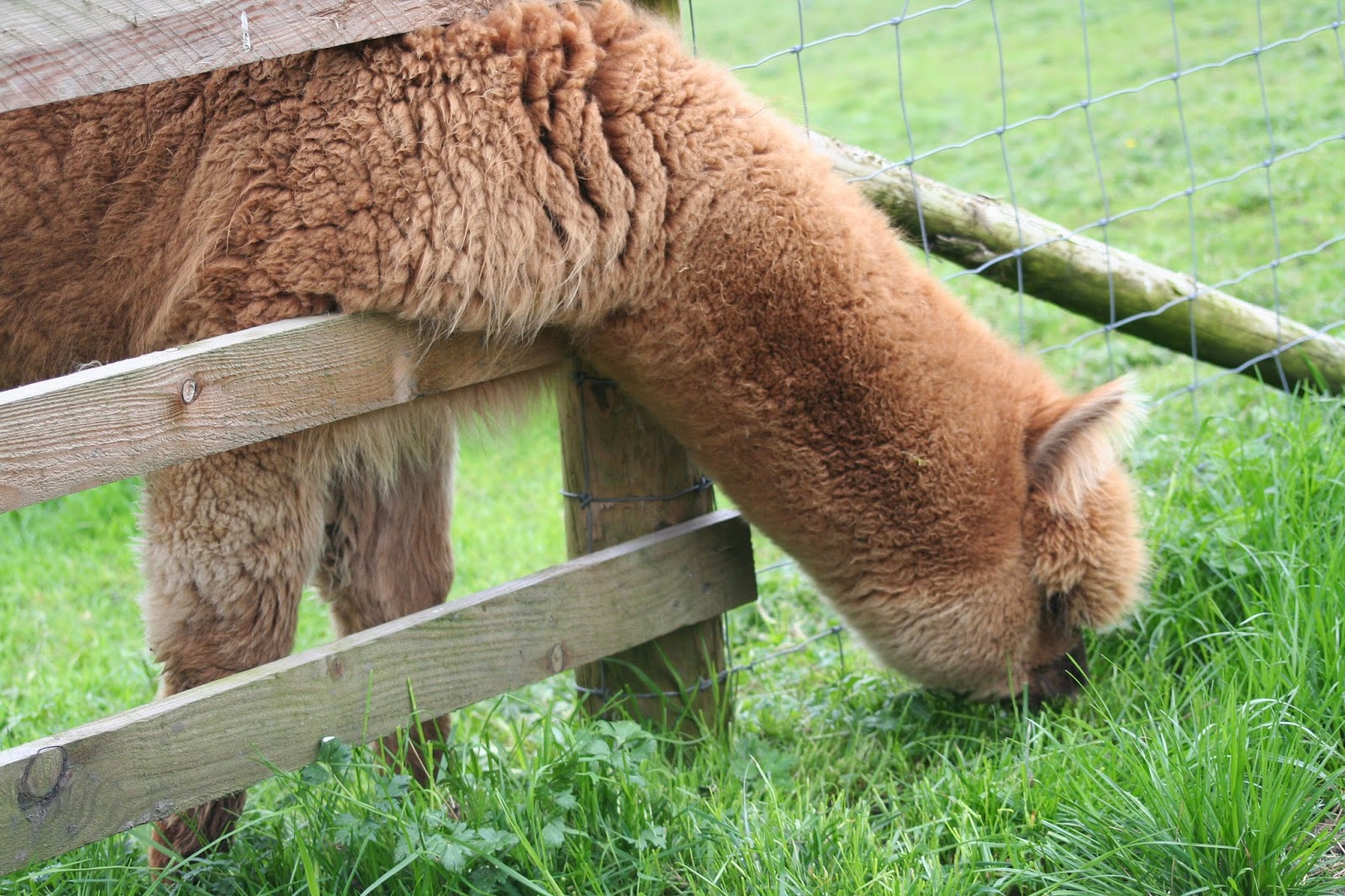 The grass is always greener

When we went down to see him next day.  He was flaked out in the shed.  He would struggle to get his head up and when he did he would be shaky. First stop was a call to the ever patient Barbara at Beckbrow. Her suggested approach was to follow an evidence based and logical process.  Often the temptation is to reach for treatment, but unless obvious and benign this isn't always the best course of action.  His temperature was normal but the inside of his eye-lids were pale, indicating possible anaemia. Poo observations (oh the joy of Alpaca ownership!) were not perfect 'beans', rather more 'turd' but with some structure.  Time to get serious and call the Vet.

Thorough examination revealed, as well as the obvious behaviours, Dougal's stomach was harder than expected and sensitive, he was holding his legs in a way that indicated he was in discomfort / pain.  This isn't easy to describe but basically his back legs were positioned further forward and closer together than normal  (Hamish was used as a model of 'normal').  Pain relief and antibiotics were the immediate treatment while poo and blood samples were taken.

The Vet was able to do initial tests in house straight away. In-fact we had some results back within hours.  Blood confirmed he was slightly anaemic and poo tests showed no worm load.  There was however coccidia.  The Vet doesn't have specific Alpaca experience but has joined the Camilid veterinary society and was able to call round and was told that even though a similar load would be acceptable in Sheep, this isn't the case with Alpacas.

Oh dear - it must be time for a picture to cheer me up.

Nope - that's not cheering me up much.  But the treatment (Vecoxan 1l , 24ml for est weight 60kg) did, it seemed to have a good effect within 48 hours.  Up and about, and hanging with the boys. 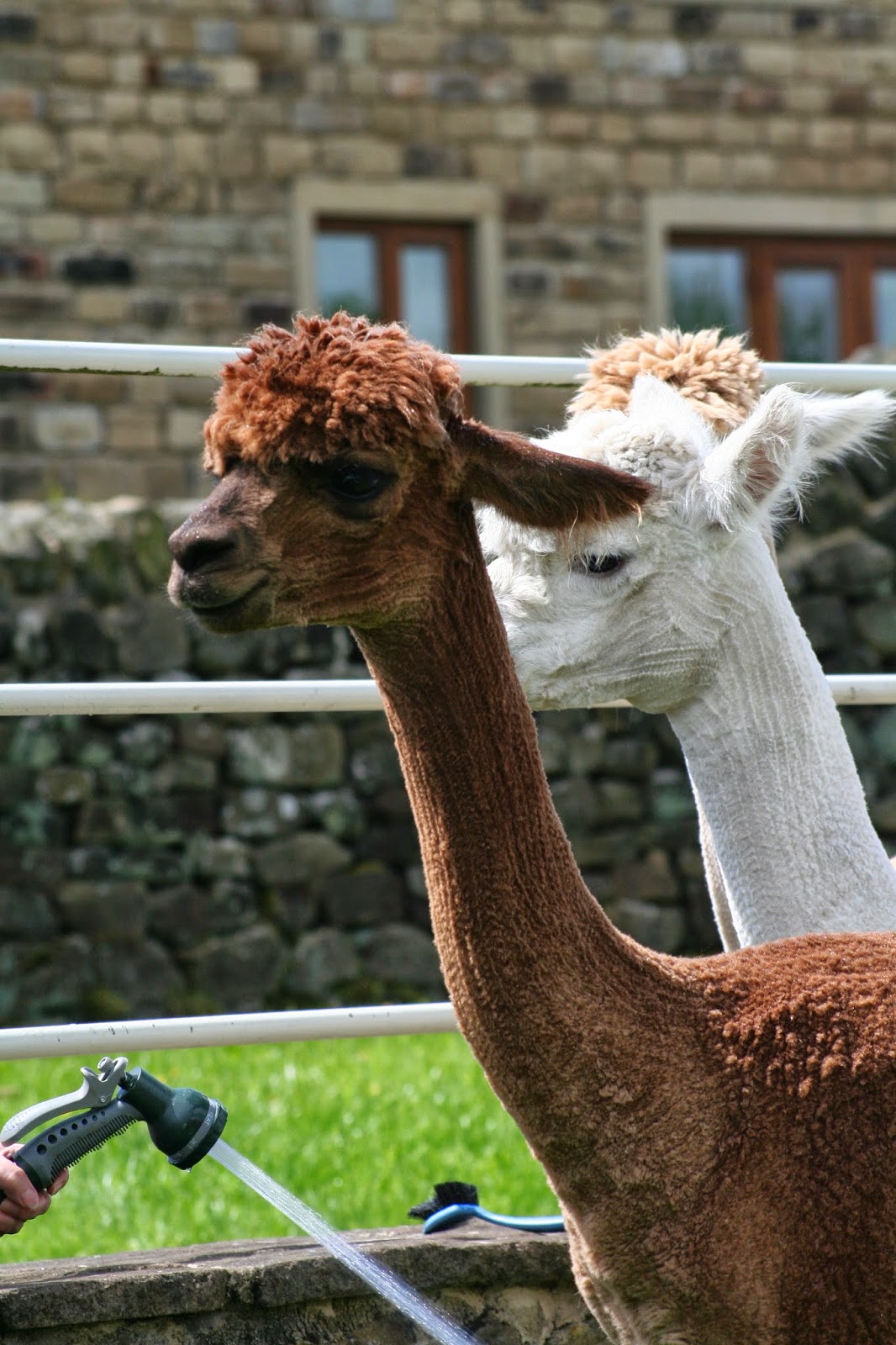 First up for 'water play'


I was observing the herd closely. 72 hours after his treatment I noticed Dougal was flat out in the middle of the paddock.  Neck out, feet to the side, little movement.  It was a hot sunny day and normally I would have just smiled and thought nothing of a sunbathing Alpaca.  After 10 minutes, no change. After what I thought was 20 minutes I thought.  Oh no ! and approached him.  Little movement.  So I sat close to him.  He moved his head and put it across my legs.  This isn't right Dougal doesn't do that.  The occasional deep breath, head across my lap and tolerating a neck stroke.  Very unusual for Dougie. There was no sight of the shakiness we had seen previously, and no vocalisation.  My thoughts turned dark. If he is going down this far this fast then there must be something serious and I need to do something now ! The Vet is on holiday, the detailed results were not back from the lab yet.  What to do? All the information I have read was spinning round in my head.  Then Bev shouted across - 'You know that one is Hamish don't you !'  Dougal was actually running about behind me, and Hamish stirred from his slumber, yawned, thanked me for my services and got up to join the rest after a nice few zzzz's with a massage from the boss thrown in ! 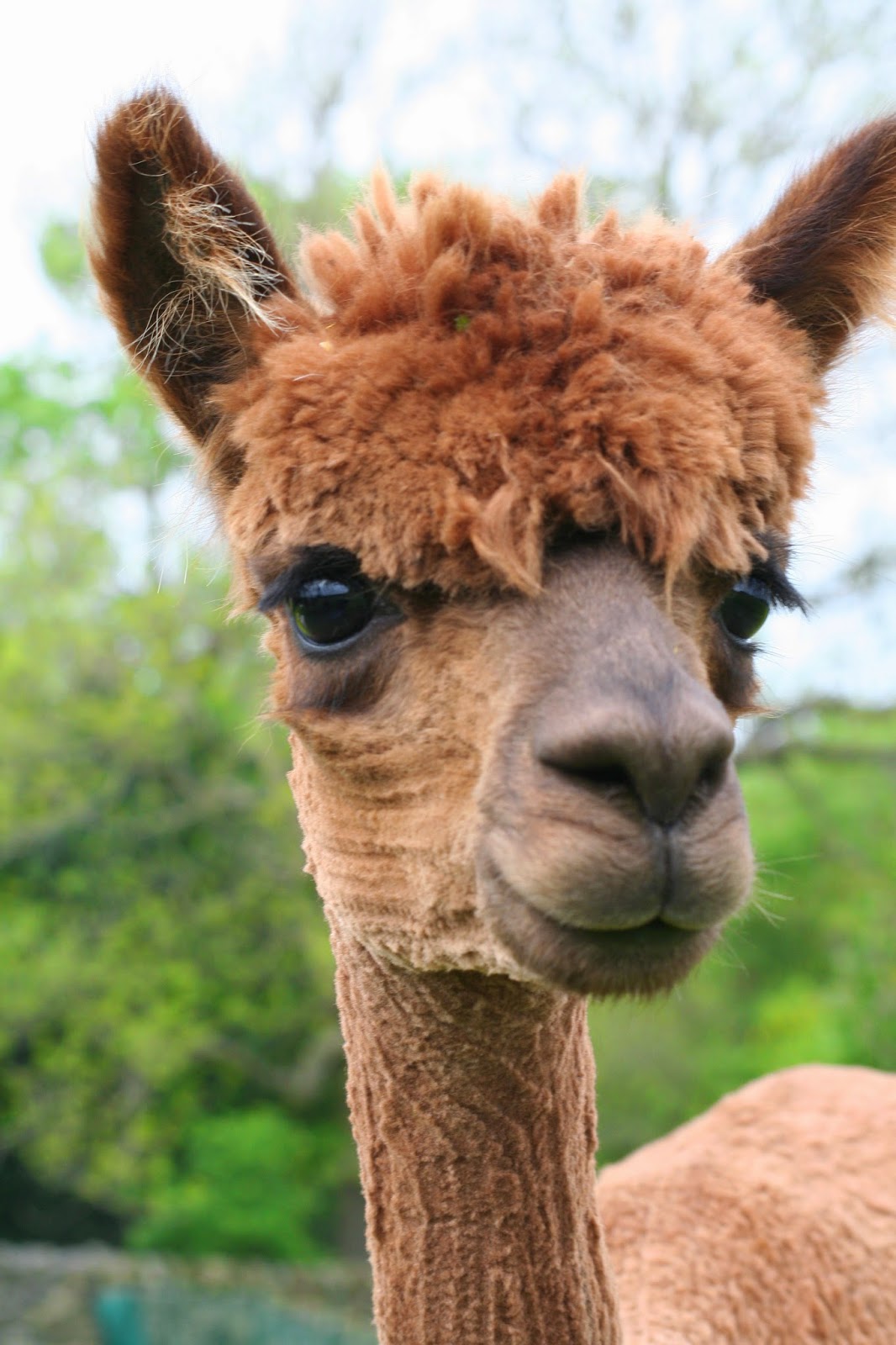 A week after treatment he is almost his old self, running alongside the tractor as it passes on the lane, grazing like there is no tomorrow, playing with Hamish, chewing the cud with big brother Noah.  He has even been seen taking a turn 'on guard' at the shed door. 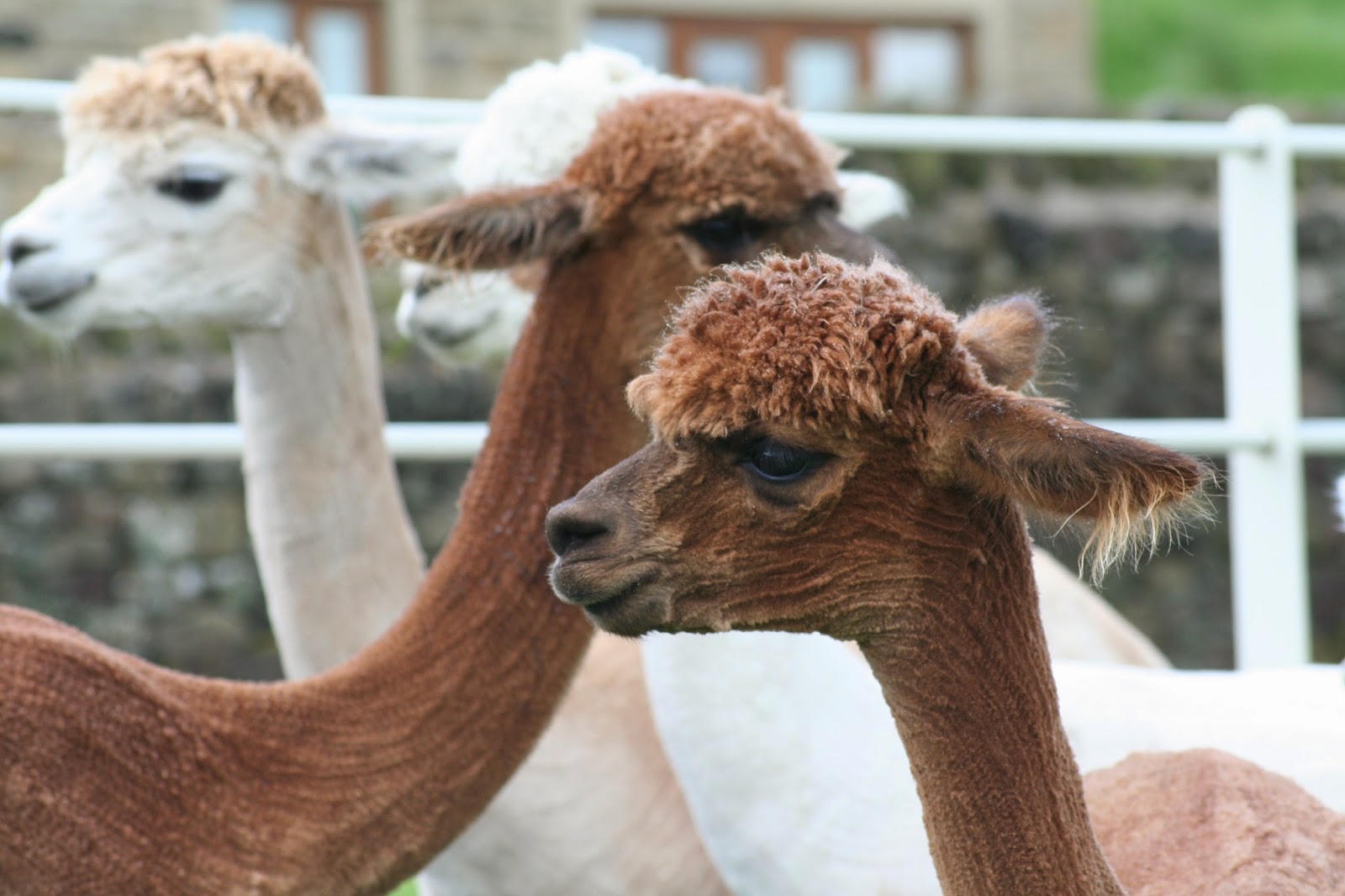 Part of the Gang

Researching the topic I have come across the usual array of advice. What comes across in the 'literature' is that it seem s normal for Alpacas to carry some coccidia but in weaker animals they tolerate this less and in the presence of other stress the animal's immune system can't keep them in check.

Dougal has been subjected to a few 'out of the ordinary' stresses; castration , shearing , moving paddock etc. But so have the others.  So we are not counting our chickens yet.  I suspect that there may be an underlying cause so we are waiting for more detailed blood work.  We will take further samples to check for effectiveness and workout a regime with the Vet this week.

In my searching I found this link from Wellground useful as it is straightforward and puts forward some of the conditions that can contribute.   We have had all these conditions this winter - So we come full circle - better get on with that drainage project!
Posted by Andrew at 12:37 4 comments:
Newer Posts Older Posts Home
Subscribe to: Posts (Atom)