I made a new year resolution to blog more and moan less. So here we are with March halfway done and no blog to be seen, probably because there isn't much chance of writing one without moaning about the weather!  The boys (and the humans) have spent a lot of time in the shed. 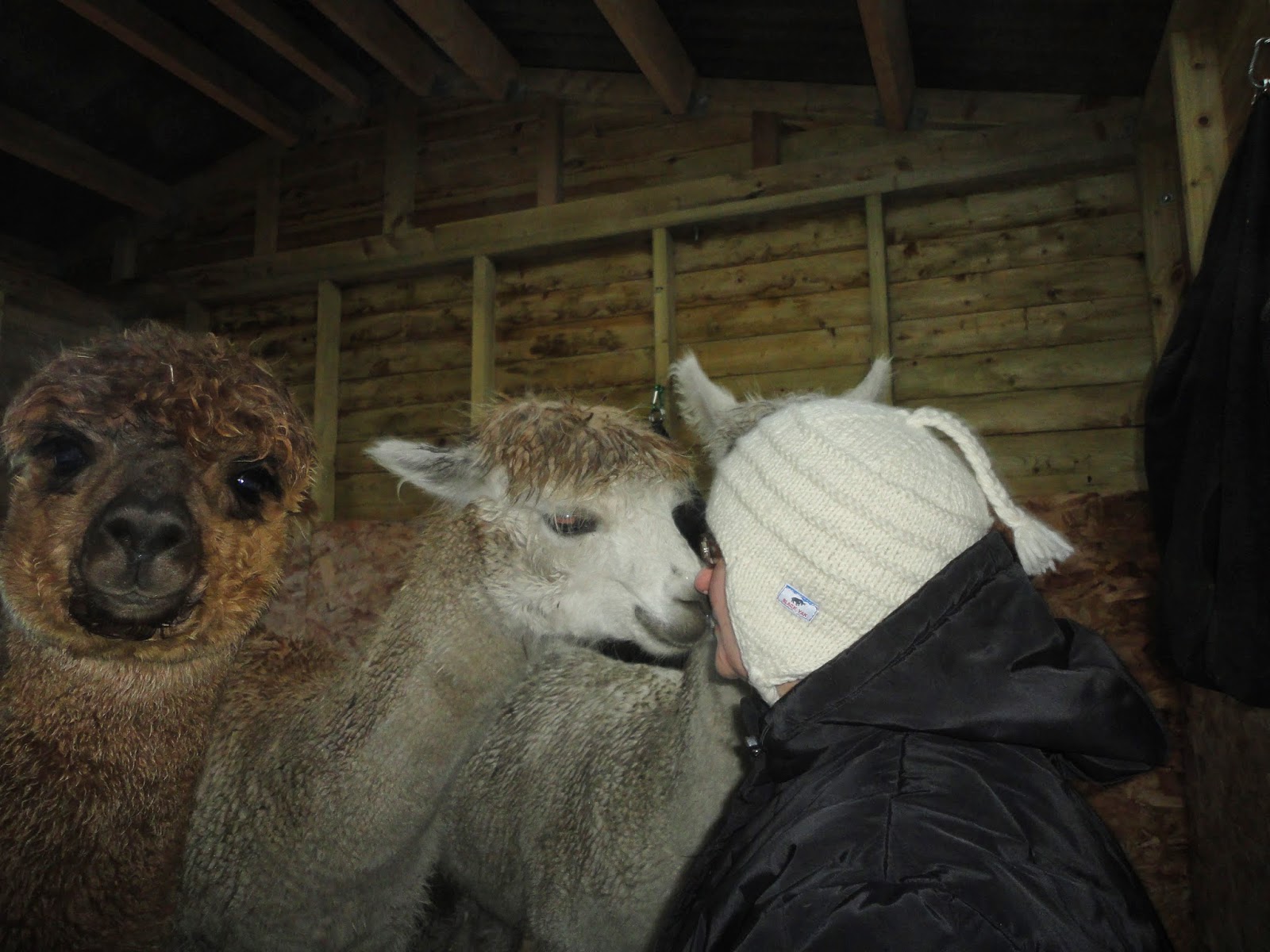 Bev and the boys taking shelter

It certainly has been a wet winter.  So wet that the field drains, put in who knows when, are showing signs of age, and are in need for some repair and maintenance.  At some points there were fountains of water raising up a good few inches from the turf and a number of mini sink holes have appeared that are just waiting to swallow a tractor wheel or worse, an alpaca leg.  This brings up the exciting prospect of a mini digger hire later on in the year.  With the drains backed up and the ground saturated we needed to construct a 'bridge' over the quagmire on the entrance to the shed. 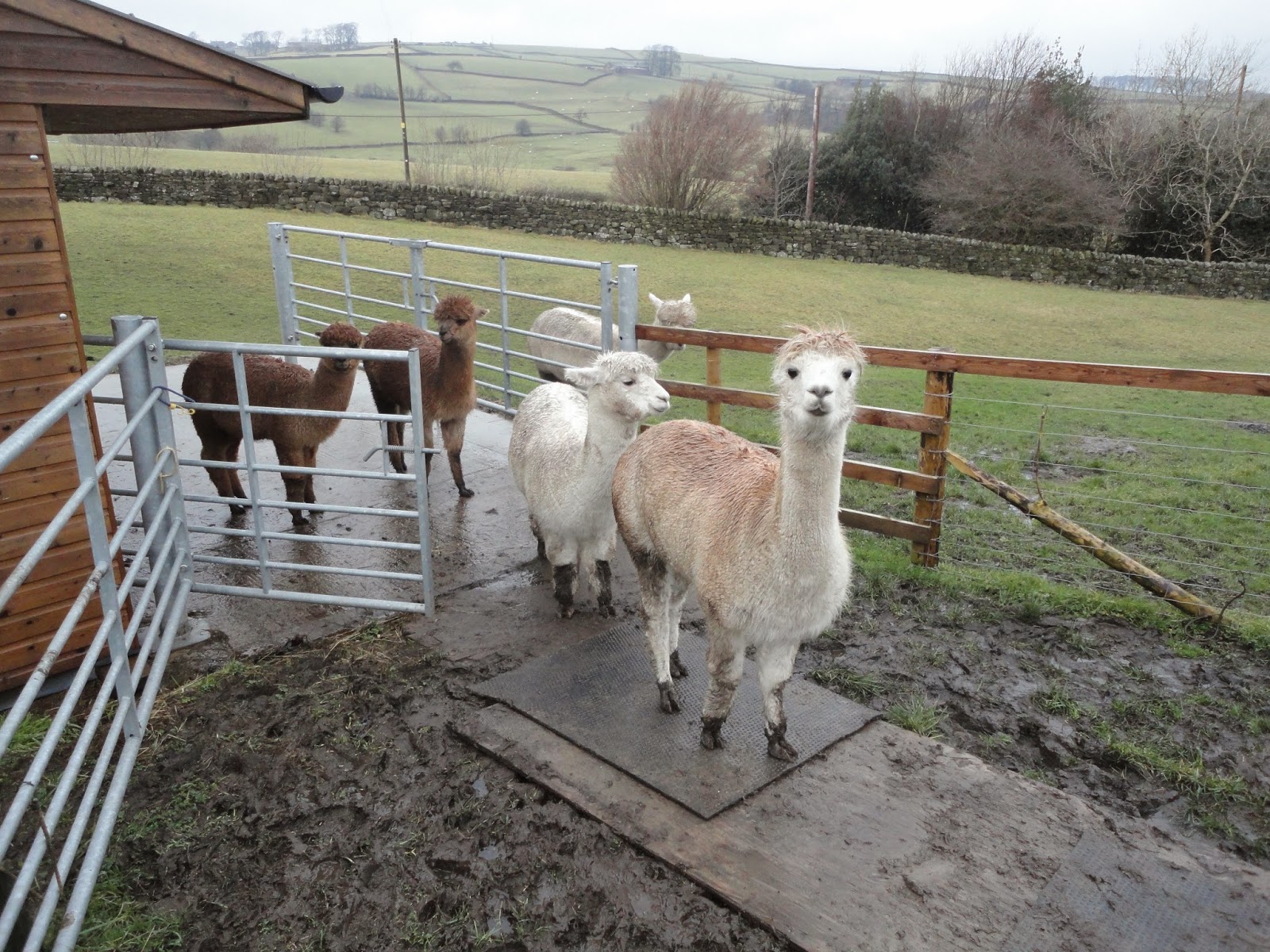 Fin leads the boys across the 'mud bridge' in an orderly fashion.

A spot of good news is that we have taken delivery of one form of 'pay-back'.  Since getting the boys we have been saving up fleece to make it worthwhile to process their fleece into something we can use.  Three years production soon mounts up and from a total weight of  13kg sorted fleece we have got back 11.62kg of  double knit yarn from the border mill.

We chose to combine Noah (white but not the finest) and Kenzie (v light fawn but fine, structured and very very dense) to  make a 'cream' yarn. Finian is kept on his own as a light 'caramel'. 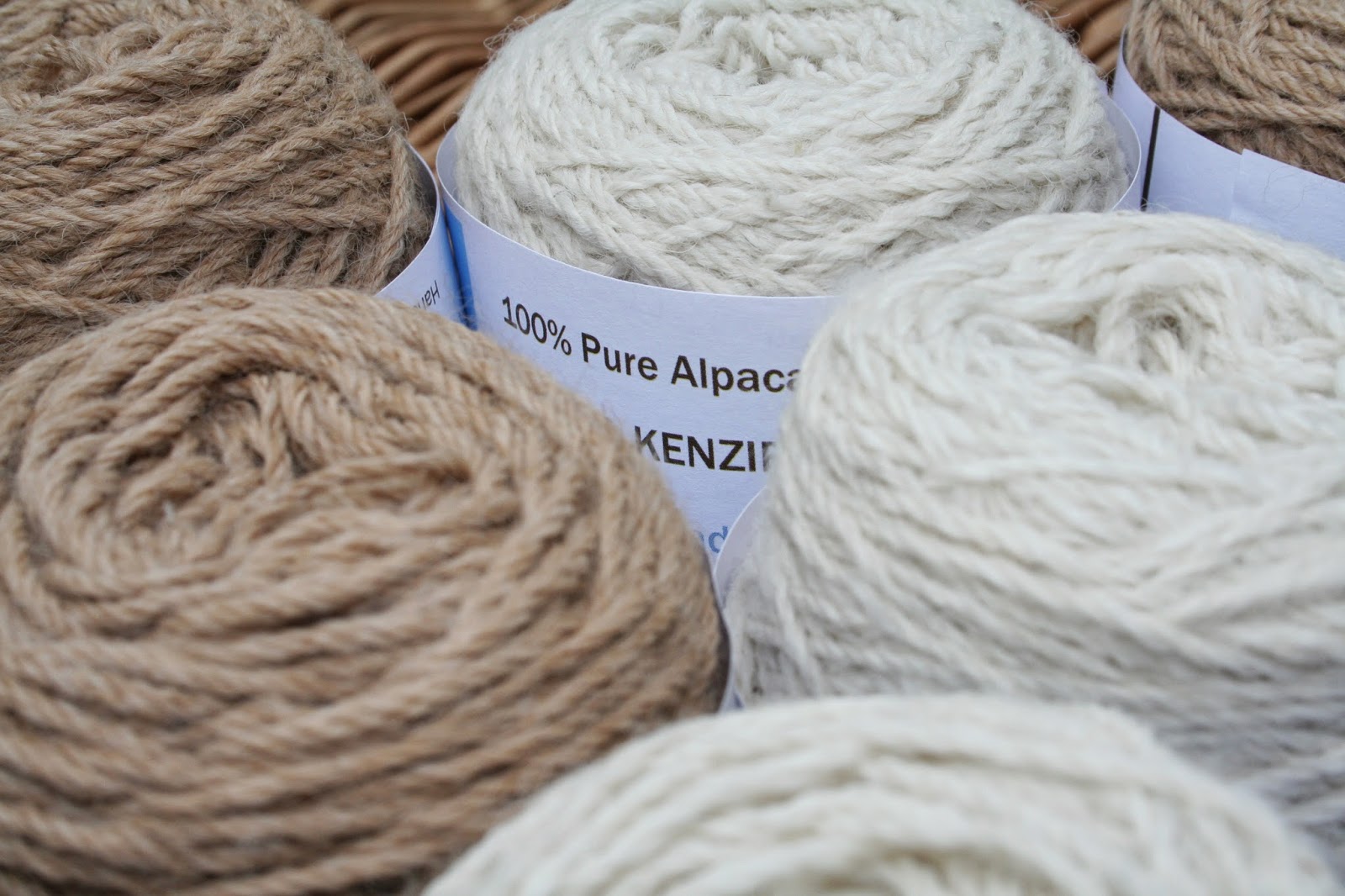 'Fruit of the Paddock'
So what to do with all this yarn?  First up, we will have something made for ourselves.  I am fancying a jumper and Bev wants a hat and a scarf but neither of us are knitters and we don't want to waste their first production so we are on the look-out for a skilled person to do this for us.

We are already saving up our next batch.  Noah already has one in the bank, he produces a heavy fleece but not the finest and we didn't want to dilute Kenzie's super-good fibre so held his last cut back for the next batch.  We have high expectations for the little boys.  These two are really in a class above the others, testament to Beck Brow's ever improving genetics.  They both have mountains of fibre that is as fine as can be that will be added to their baby fleeces for more strength.

Of course a couple of  garments won't make much of a dent in nearly 12kg so we have hatched some other plans.  This has necessitated some additional promotional shots that I though I would share with you  (Thanks to Fran for these) 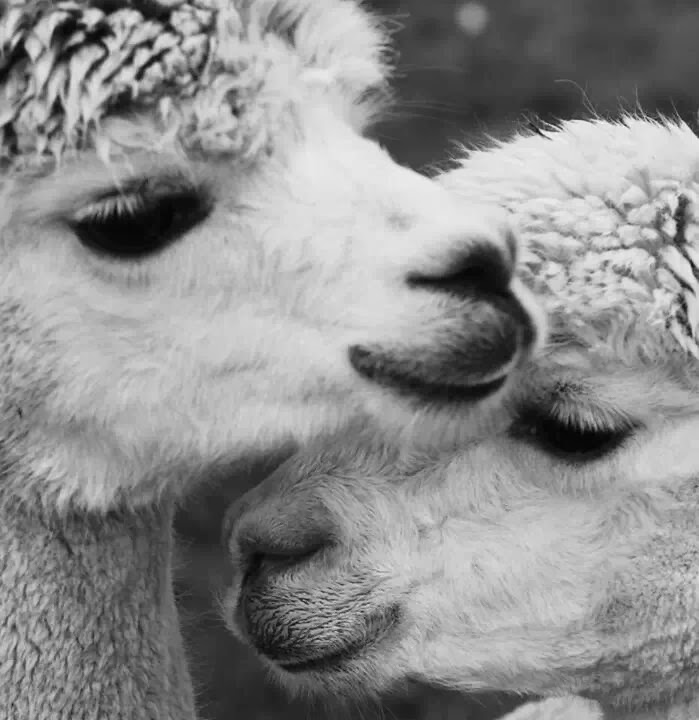 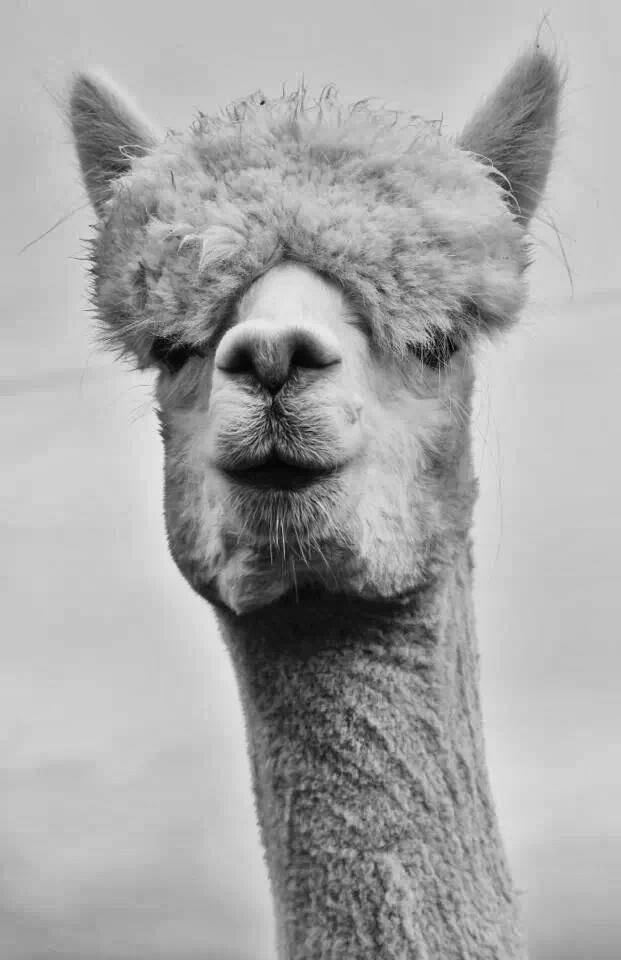 Another form of 'pay-back' was less expected and is a little less tangible than balls of fibre.  Little did I expect that when getting a few animals I would also gain so many human friends.  This weekend was the BAS national show and we took a trip to see 'what was what' and to lend a hand to Barbara from Beck Brow who was a show organiser.  Barbara, in addition to providing us with great animals, is always on hand for Alpaca related support second to none.  If that wasn't enough, Barbara and Paul also provide us with laughs and friendship that of course are valued above all else.


A few years ago we turned up at a similar event.  It was early in our interest in Alpacas and was probably only just a day out.  We spoke with a couple who patiently explained some of the basic needs and commitments and answered what must have been some pretty daft questions from some random punters with patience and enthusiasm. It turns out that these people were Jenny and Graham from Fowberry Alpacas. Three years on it was an honor to be trusted to handle their superb animals at a prestigious national event. 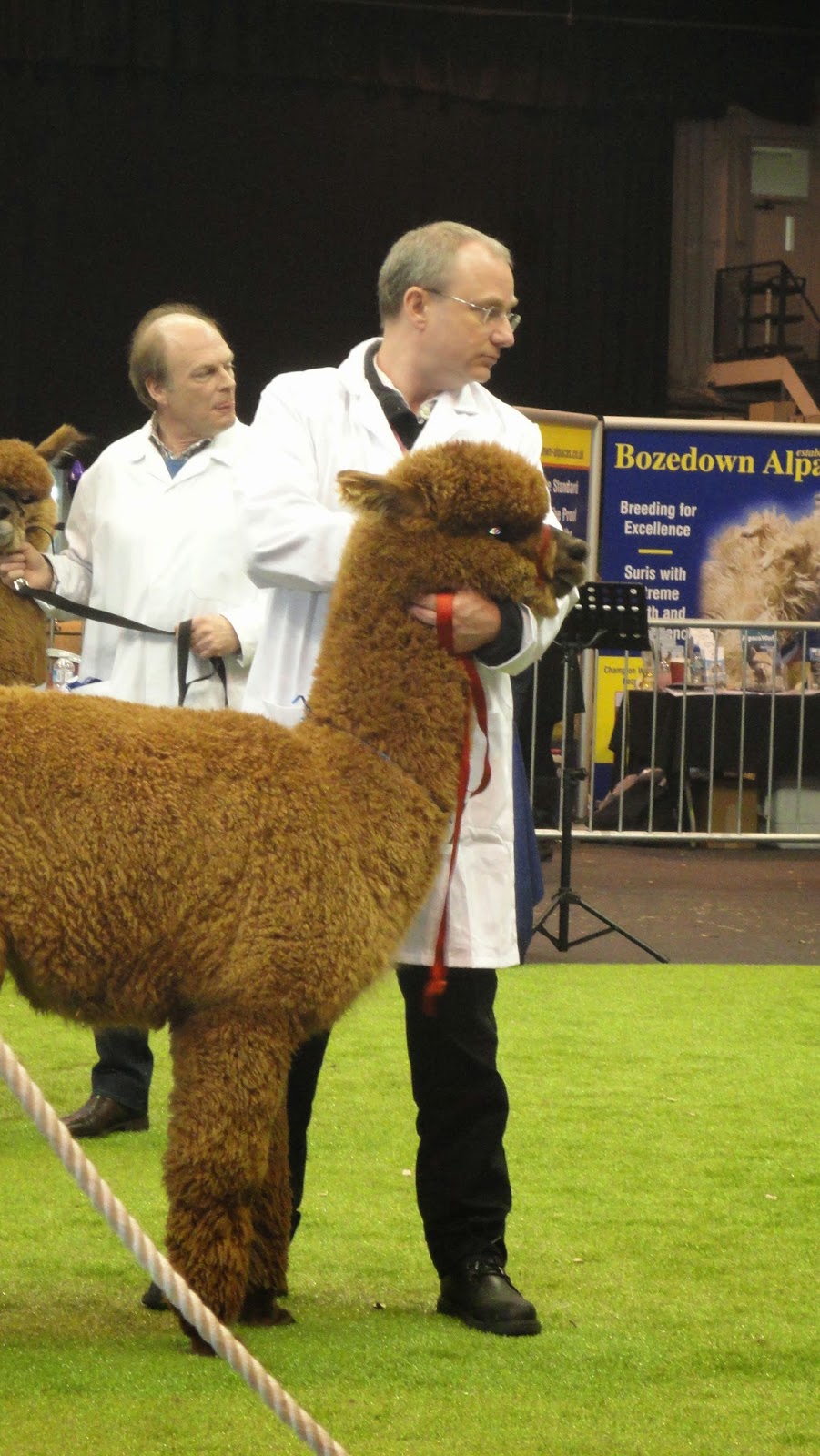 Andy in the ring.
This chap was 'Shogun', a bit of a handful at times

It was great to meet up with so many like minded people, too many to mention, some of whom we knew only through blogging, until this weekend.  So the pay-back ? I can tell you the Alpaca community is filled with people who are 'good people'.  They are from all walks of life and doing it for all sorts of reasons - But to a man (and woman) they are passionate about what they do and never hold back with help and advice.  If you are thinking about making the first steps - come on in , the water is warm.