I was going to ask questions and seek advice about topping regimes as we have managed to completely get things screwed up.  Dividing the paddock into two seems to have had the effect of making each half twice as productive so our boys are too fat again even though there are more of them and they are restricted to half the grazing. They are are better than they were last year but they are still too tubby.  We need to avoid them becoming chubby carpet factories. 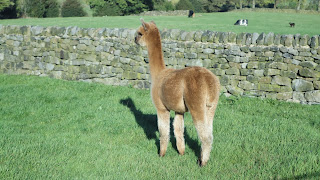 I had a great day Saturday.  I collected the neighborhood bins on Ted the tractor. I unhitched the back-box and hitched the topper - even the PTO fitted without the usual wrist twisting manipulations.  I topped the overgrown poo pile edges on the archery pitch in the big paddock ready for boy transfer.  I strimmed the overgrown gateway , I added some cuttings to my domestic compost that had got a bit too rich from excess shopping.  Then it was off to 'Yarndale' to look at, well, yarn of course. This was an enormous event. 13,000 knitters visited on the first day alone!  It was good to see a lot of Alpaca fiber product there on many stands in may forms.  It was especially good to see Robyn from whynot there with some animals.

On Sunday I did a very thorough poo pick. 3 barrows a week now we have 5 boys producing. I then forked over all the gooey bits and mixed in new top-soil and grass seed. We wormed the boys and all was well with them and us.

There was a little twinge.  My Fergie de-mounting technique involves throwing a leg over the steering wheel, perhaps I overdid it getting on and off the tractor.  The twinge got a bit worse, maybe the poo picking was a bit enthusiastic.  The twinge became a niggle. Could it be restraining Fin for his jab I had pulled a muscle ?  Maybe the sausage sarnie at Yarndale was to blame ?  No matter, ill mend and it was a  lovely day.

Monday morning breakfast routine was unremarkable.  Apart from the 'stich' in my side. Dougal has now come to expect his bucket to be lifted off the ground for him and then held. I am supposed to fend off the others while he takes his own sweet time chomping his Camelibra.  If I fail to do this he melts me with a cute look involving especially wide sad eyes.  Call me a softie but you cant stand up to this for long.  Better have a picture 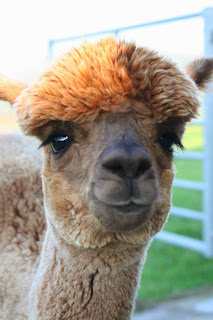 
And that's the last I saw of the boys for a few days.  During Monday the stich became a bit of a pain and on leaving work I decided I should probably get it looked at.  It was dark by the time I got back on Thursday night - minus my appendix.

Our district hospital is not very far away so staff are local. A typical encounter.  'Hello, I have come to do something undignified to you, but while I am doing it I'll ask you some questions to distract you.  Where do you come from ? Oh isn't that near the Alpacas ? Oh they are your, they are so cute. What do they eat ? Do they spit ? Are the brown ones a different breed ? My kids know all thier names... And eventually ... How are you feeling ?

I was pleased to get out of the place but it was Saturday before I made it down the shed.  Noah came to check me out.  I swear he sensed not all was well. He behaved strangely, he came alone, normally he would wait for the others, he sniffed at where my wound is and then pushed his weight gently against me and stood there for several minutes. The other boys eventually gathered and settled down around me.  Bev was just out of range with the camera before the magic was broken and Fin decided the best thing to cheer me up would be to eat my hat.

So all is well, I am back on breakfast duty including some light poo picking. But the planned front line application will have to wait.