It's been a week, an unbelievable whole week of lovely sunshine.  The day after shearing out came the sun, just in time because we had been worrying about shearing wee Dougal.  So small and thin, we thought, so we ordered a dog coat just in case.  However, fleece off there's nothing very wee about young Dougie, he's quite solid in reality, so back went the coat, unopened, for a refund.

There was plenty of opportunity for water play at the weekend, Noah Kenzie and Dougal like a spray,  Hamish prefers a complete drenching.. 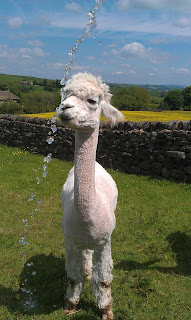 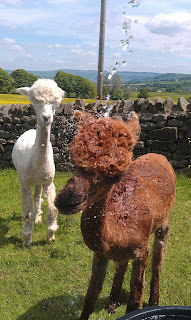 Another sunny day treat is snoozing in the dust bath the boys seem to have made for themselves - on my archery pitch.  Here's Kenzie, I know he's hard to see, looks overexposed, but no he just glows like that in the sun.. 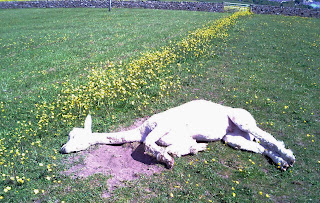 ,
Notice how Kenzie is left in peace to snooze
No such respect for my personal space when I try for a lie in the grass 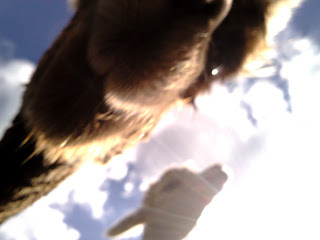 Hamish and Fin to the Rescue?

Meanwhile, back at the water play on Saturday we both thought the shearer had left a little clump of long fleece under Dougal's right eye, it made him look a bit cockeyed, but no worries.

By yesterday, Sunday, the 'clump' was the size of a golf ball, definitely not right, a quick inspection and a dental abscess was diagnosed.  Poor Dougal, he's already had to fight off an eye infection, now this.  He's been off his hard food for a couple of weeks, but he's been grazing and eating hay, and chewing the cud ok, so we thought he just didn't like it.
﻿ 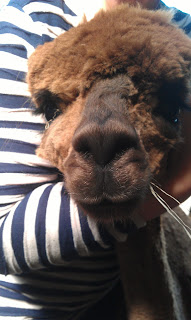 Poor Dougal﻿
﻿
Today Chris the Vet came out, confirmed an abscess and syringed some pus out, then he gave Dougal a painkiller and the first of 4 injections of antibiotic (Nuflor).  We will give him the other injections every alternate day until gone, and keep fingers crossed there are no underlying issues that will make the abscess erupt again.  Dougal used to love to give kisses, but not anymore, I hope he forgives us soon.﻿
Posted by Bev at 23:31