The new boys have settled in well.  But not without a couple of minor issues.  Dougal is a little chap and there isn't a lot of grass. He gets sugar beet and Camelibra twice a day, and eats his share from the hay bags, but we wanted to be sure he was making progress so decided to weigh him.  We have never done this before so it was a bit of an adventure for us all.  Simple.  Grab the boy and stand on the bathroom scales.  We expected all sorts of fun and games. But no.  He was as good as gold. The results?  +4Kg from his pre-delivery weigh in.  That'll do lad , that'll do.

I expected him to run off afterwards and hide behind his pal but he jumped back onto the scales himself, keen to show Hamish how it should be done. 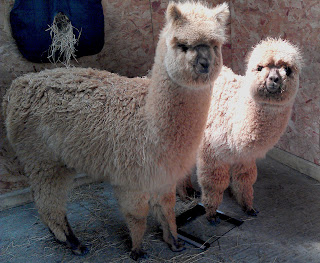 How come I weighed 3/4 more a moment ago?

Hamish, had managed to pick up an eye infection. We arranged to pick up some anti-biotic eye drops from the vet and began a course of treatment.  After a few days this was slowing the progression of the infection but not really getting on top of it.

We irrigated the eye with some saline, well ok, a Sainsbury's eye wash! - (Great squeezy bottle with a directional jet allows you to aim where you need it).  We saw the end of a bit of grass or hay but failed to get hold of it and it disappeared under his bottom lid not to be seen again.   So the vet was called.

The grass was showing a by a millimetre or so and Chris the vet was able to get a hold of it with his finger nails and pulled.  It was 3-4cm long with a decidedly yucky bit at the end !  I'll spare you the picture!  Chris added some stain to the eye so we could see any injury and indeed there was some ulceration where the grass had been.  Also there was no sign of the stain flowing through his tear duct so we attempted to flush this with a small flexible soft end on a syringe loaded with sterile water.  Not really sure that worked. We continued the drops for a couple of days but they were now causing irritation so were  discontinued.  The eye  was perfectly dry the next morning and we have seen no sign since. 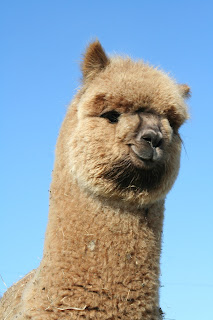 I have said it before this year but I am now saying it out loud.  Spring has sprung.  I spent most of the day in the paddock today, sitting here tonight, I am feeling a little sun burned.  Hard to think that this time last week we still had the last of the drifts. 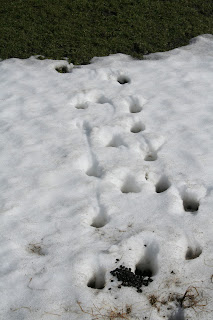 Every picture tells a story
This story is that one of the boys could not wait for the old poo pile to be uncovered.  Weird animals !

News of the new arrivals has spread.  The sunny day brought many visitors but strangely the behaviour of greeting guests who come to the gate has been abandoned.  The little boys are not accustomed to this but the big boys have lost all interest too - I think they are keeping clear to protect the new guys.   Of course there are some visitors with special privileges. 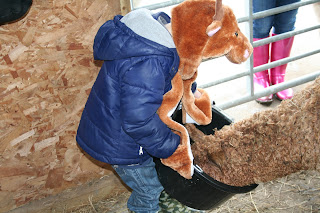 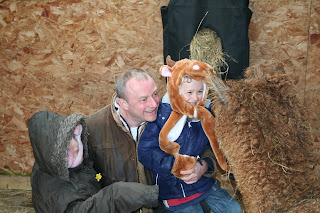 It's alright - It's only Edward and Katie

Today was supposed to be about catching up with jobs, but this was just an excuse to spend the day observing the herd dynamics.  These have changed, and continue to change, since Hamish and Dougal arrived.

The biggest difference is with Kenzie.  Now firmly in the role of 'uncle' Kenzie.  If Dougal isn't with his mate Hamish he is to be found with Kenzie. 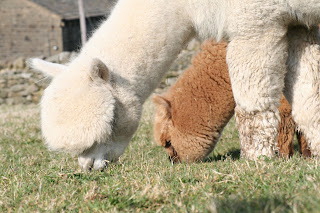 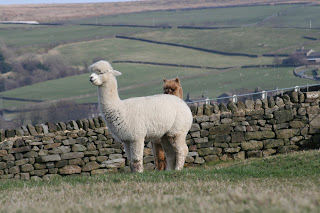 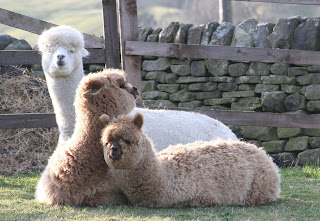 Sorry its a long one.  But there are lots of pictures !

Finally we have emerged from the drifts and life has been able to get back to some kind of normality.   This has meant that we could contemplate the delivery of the new boys.  We are so glad that for one reason or another we delayed.  I know Alpacas are tough beasties but I would have been seriously worried about little ones in the worst of the gales and snow.  No matter how hardy, the physics of heat-loss and mass tell me that the little guys could have been in trouble without the tarp solution in place.

Enough of such dire thoughts !  Welcome to Hamish & Dougal.. 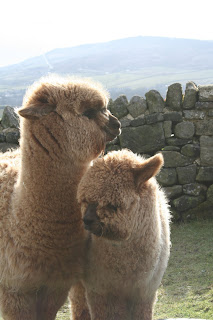 We first decided on brown boys a while ago when we saw some at a show.  We have kept an eye open but in the end decided that if suitable boys became available from Beck Brow we would like these.  There was some logic behind this.  Firstly we are very happy with the support we have received, and continue to receive, with what have now become known as 'the big boys'.  That's important, but we also know that the new boys would have come from a great breeding programme and would have been well cared for.  Now we know a little more about the alpaca world I am sure we know lots of others sources where this would also apply, but also there was a chance that we could get some of the same traits as we have in our big boys and we are really very happy with them.

So last Sunday the day arrived. Talk about dedication.  I know for a fact that Barbara had been on the go for at least 18 hours the day before, and probably the same again for a few days before that organizing the show in Carlisle.  But delivery was made as arranged on the day following the show.

We originally had an extensive preparation plan. An additional method of dividing the concrete was thought of,  A conversion of the 'human side' of the shed to a separate space of the new boys was planned, separate paddocks were created, of course additional buckets, hay bags, new feed, new halters, stock up on medical essentials.  The snow kind of put paid to a lot of that.  We were ready, but not all the plans had been executed.

Caught out by a delayed text I needed to move the big boys into the big paddock quickly while Paul positioned the van and the new boys were got ready.  Soon enough they had been checked over in the shed and then they were off exploring.  Needless to say this caused some deal of curiosity on the other side of the fence. 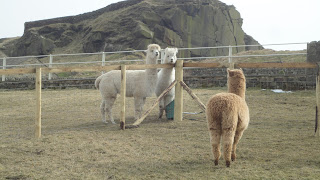 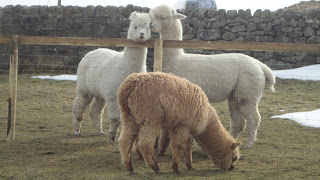 Kenzie not too sure about this .. Not one for something new.  Seeks reasurance from Noah 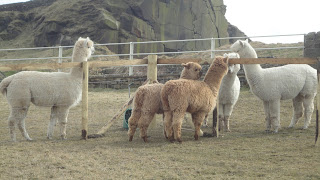 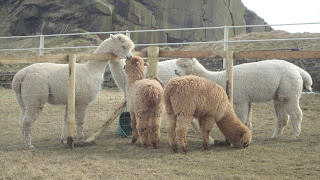 With this, we left them to it for a while.  The plan was to leave the big boys to fend for themselves in the big field and introduce the little ones in a day or so, having the benefit of the shed.  When we returned to the field however it was obvious that they had bonded. 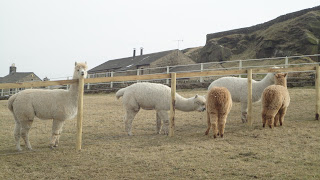 One on one time - Where my little brown boy says Fin ?

There has been no looking back since.  Remarkable how a new herd dynamic is working out.  Certainly we have no concerns for the little boys in with the big boys.  Uncle Kenzie has been appointed baby sitter in chief.  On the first night he got to sleep in the shed with Hamish and Dougal, while both Fin and Noah sat outside on guard (never seen two guards before). 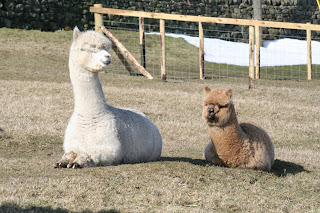 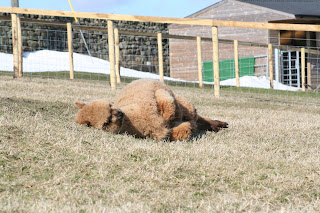 Hamish goes for a Roll 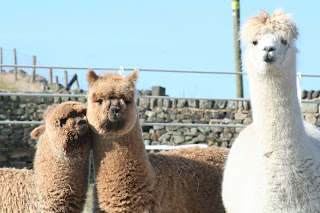 Fin does look after them, but remains a little aloof.  We suspect that Hamish may end up top dog though.  He is not scared of anything. 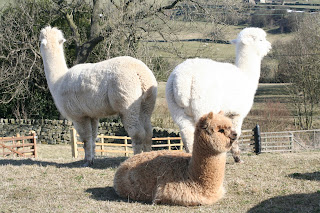 Not quite sure what Fin and Noah saw.  Perhaps a passing dog walker.  They both stood together and took this stance.  Hamish and Dougal were oblivious to the danger - whatever it was. 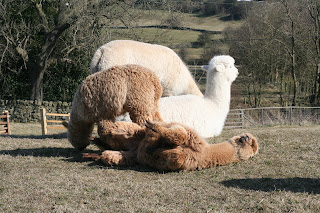 But I think you might say.  The herd integration has gone OK ! 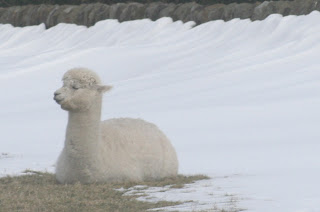 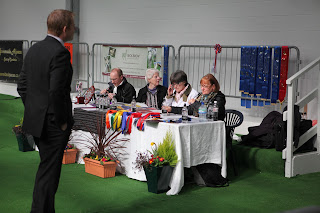 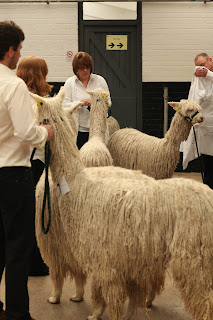 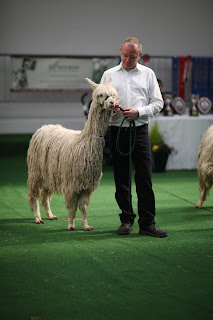 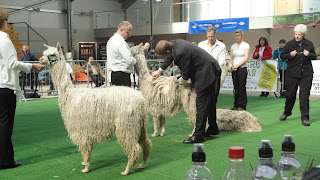 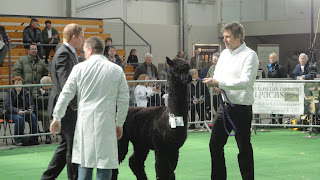 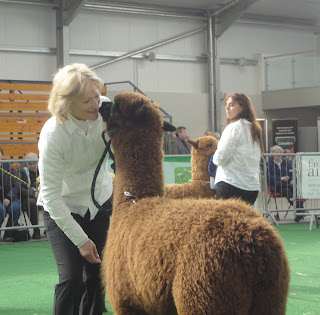