When Every Choice is Dangerous

The blizzards continued the rest of Saturday, Sunday and Monday.  With 20 mile an hour winds from the east the snow was blown off the fields all the way up the valley and piled up 6 ft deep around the boy's shelter, and then it blew straight in through the shelter's open doorway. 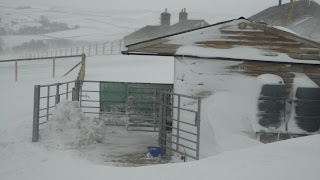 This was taken on Saturday, by Monday the snow reached the top of the gates. 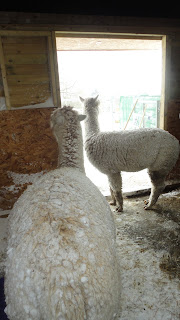 ﻿
There were several inches of snow on the floor and on the boys backs inside the shelter, there were lumps of ice stuck to their fleeces, and Noah was shivering.  So on Sunday Andy fixed up a tarpaulin, fixed to a frame fixed to the top of the shelter opening and wrapped around the gate. 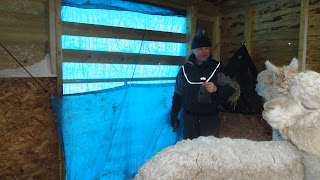 It worked perfectly, no more snow and bitter winds inside, the drawback of course was that the boys were shut inside, and couldn't even see out, couldn't get any exercise or eat grass.  Also they were obviously bored and very unsettled.  The forecast was atrocious, there was no knowing when we could let them out, and to make matters worse they started chewing and shredding the tarp.  Every time I left them I was worried they would swallow threads of plastic tarp and make themselves ill.

By Sunday our lane and driveway were completely full of 6 foot high snow drifts, which we had to cross to get to the boy's field. Initially there was much falling over and crawling on hands and knees to cross the drifts, until I mastered the technique of walking on top of the snow without sinking in up to my knees. 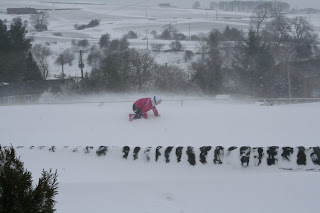 Hannah, aged 7, demonstrates the crawl on hands and knees technique in a blizzard..
That wall is 5ft high on her side, and she is in the middle of the drive. 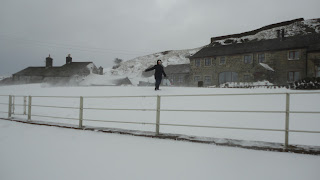 That's me same place, from the alpaca's field, our house behind me.﻿

On Monday morning Andy had to trudge across the fields carrying his suitcase, to get out for a flight to the States.  He wasn't keen to leave me on my own but I persuaded him to go. I went with him to the road gate and brought back his wellies, hat gloves etc. He sent me a text from LA yesterday to tell me he was working in shirt sleeves. !!.


Not LA, our lane entrance
﻿
On Monday afternoon the boys escaped.  Nightmare.  I'd been letting them out of the shelter onto the concrete handling area every time I went down to look after them.  They hadn't tried to cross the snow before, but Fin (our herd leader) must have been at the end of his tether.  There was grass on the far side, so he ran for it, and the other two followed.  Unfortunately what looked like level ground was actually snow covering a steep drop away, and a very deep drift of about 4 feet.  They all sank up to their armpits, but struggled and panicked and with great effort got to the other side.

Within moments they had recovered and were running and prancing up and down the field.  Leaving me wondering how to get them back across the snow to the shelter for the night.  My only option was to cut a path through the drift somewhere for them to use.  I chose my spot and began digging.  After 2 hours there was still about a yard long strip of 4 ft deep snow to remove but at the rate I was going it was going to take me an hour, and it was already getting dark.  So I called our neighbour Richard, the poor man had just got home from work but he kindly grabbed a spade and came over, and we were through in no time. 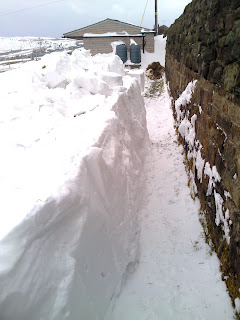 It's a bit of a tunnel, but the shake of a food bucket brought Fin down it, and thankfully the others followed.  And they were soon safely behind the gate. 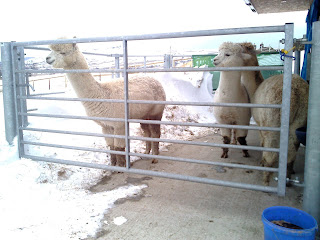 The following morning, Tuesday, I had action plans.  First I rolled up the bottom of the tarp and fixed it up so that it only protected the top half of the opening, at least it kept some of the snow and wind out, and it was out of chewing reach.  Now I was able to leave the shed gate open and give the boys access to the handling area, now with it's own gate firmly closed.

It continued to snow and blow on Tuesday and Wednesday, I felt the safest thing was to leave the boys behind gates .  But yesterday and today were dry so my friend Julie helped me carry out my second action plan. I put halters on the boys and we walked them through the safe passageway and down to the big field.  No dangerous deep drifts there, a bit of grass to graze, and a safe way to get there, with a little help from a friend.  In the late afternoon a feed bucket attracts them back through the safe passageway, which they are now familiar with, and back to the shelter for a good nights sleep all the better for a bit of grass, freedom and exercise.

Heaven knows when the snow drifts will melt, or when I'll be able to go back to work (thank goodness I'm self employed).  We've had to postpone the delivery of our two new boys, planned for Sunday, sad but sensible.  Andy's back tomorrow night, and jet lag permitting he's hoping to get the tractor out and do some drift shifting..
Posted by Bev at 19:23