Christmas is over, the goose remains fat because we were in Thailand eating fish curry.

Don't get me wrong, we love the boys to bits but were not too sad to exchange the trudge down the muddy paddock in the rain for a 'at your pleasure' breakfast with omelets cooked to order at your merest request, followed by tropical fruits, followed by pancakes, followed by breads with freshly squeezed juice, all eaten in your shorts and t-shirt while looking out on the manicured gardens through sun glasses.

Its a Alpaca blog but Ill throw in a picture of the holiday to keep things from becoming too textual. 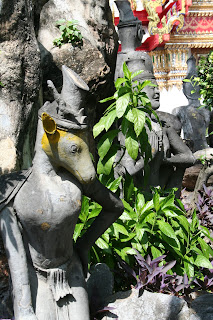 Closest thing to an Alpaca in Thailand

Of course the first thing we did when we got home was to slip on our wellies and go and see the boys.  We had missed them while we were away but I don't think this was reciprocated.  When we were away a neighbor and friend takes care of the daily routine and does it very well indeed. I think that maybe the boys prefer her to us.  Less condition scoring and tutting about being fat, she never injects you , never puts your halter on , never squirts Fasinex down your throat, does not fiddle with your man bits (or at least where they used to be!) and I suspect she may bring interesting, friends from time to time.

So the boys were in great shape.  They were filthy dirty, but then again reading everybody's blog they are in good company here.  Finally the castration wounds are 100% fixed, one of the pleasures of my return was to pull the last bit of dried scab away !

And so back to the routine.  This includes a new year resolution to slim them down.  In the winter our regime has bee two hard feeds a day (1/2 cup between three) and hay bags topped up morning and evening (amounts to a small bale a week between them at most).  We don't give them treats and we don't use sugar beet , we don't use haylege , oats or anything.  In the summer is half of this for hard feed but we do keep hay always available, they eat about half a bale a week between them.

How does this line up with other peoples experience for adult males ? Are we over feeding with supplements and hay ?

But before we could get the slim-fast plan into action.  The weather conspired against us.

Can you spot the boys ?
(no - they are down the shed refusing to come out !)

We have had around 4" of snow for about a week now. But its been quite nice really - not much wind for a change and relatively clear sky.  The boys are fine with this but are now bit bored.  There really isn't anything to look at in the field.  Just white stuff.  No grass, just hay and the water keeps on going hard ! 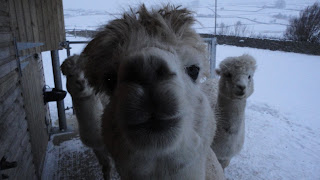