Its been a big day for the boys.  I told them repeatedly it was going to be a big day over the past few weeks but they didn't seem to care.  'Yeah yeah, whatever, where is the hay?'

Having thought it through we have decided to go ahead with castration.  We debated this in late spring (see past blog) and had decided not to, but we have changed our minds.

Why ?
We think that castration will help settle him down a little and may help us if we decide to introduce any new additions to the herd.  I am a little skeptical, I think they may be more or less the same after the event, but with sore bits for a while. Lets see.

So.  Its was a day off work and out bright and early with the pressure washer again, to change the shed into a field hospital. This involved pressure washing and disinfecting with something pink and DEFRA certified to kill all germs dead for a couple of days (Same stuff you use in foot baths for foot and mouth according to the label).

Then an agonising wait for the appointed time.  Neither Bev nor I could settle down to anything.  I busied myself trying to fix my power-line gadget thingy, fetched some logs, scraped the tile adhesive off some tiles that must have been on there for 10 years, pottered in the garage, checked on the progress of the poo-log I made last week-end (still soggy), fiddled with my phone etc. etc.  Nothing got done right, nothing really distracted me.

Chris the vet turned up at the appointed time with his usual cheer.  The boys ran to the shed with their usual thoughts of some grub or other interesting thing.  Then it was down to work.

One at a time they were brought forward into the OR (shed) from the pre-op room (yard).  Fin was chosen to go first, we wanted to get him done as he is apt to enjoy snuffling your ear or tugging on your collar if you are bent over one of the other boys.  Mildly annoying if you are doing something routine, but not what you want when doing something more delicate. Kenzie was going to go next because he would stress if left to last, Noah would bring up the rear (as it were).

Chris is a member of the BVCS and his experience shows. The epitome of  a calm, organized professional.  He soon got down to work.  Setting out his implements, drugs, potions, gloves etc in the 'human side' making great use of Bev's archery target as a useful shelf.  Then to business proper.


Step 1 - Ask the right questions about general health and assess the animals in a calm conversational manor with subtle hands on before you begin. (Boys professionally certified as Fat!)

Step 3 - Ask if it is OK to shave a small patch of fleece - assure owner that it will grow back (I guess this one is from experience - but for goodness sake would someone really object?)

Step 5 - Andy to the left, using the usual head cuddle / hand on back restraint.  Bev to the rear right.

Step 6 - Sedative into right Jugular.  Just a few seconds and you can feel the Alpaca begin to relax in your arms.

Step 8 - By this time the legs were getting a bit wobbly (the Alpacas, not mine) and were soon on the ground cushed, then on their sides.

Step 9 - Not exactly sure about the detail of these next steps.  I was at the front with a relaxed, but clearly aware Alpaca in my arms.  I know it involved a sterile sheet, a scalpel, a clamp, some suture, There are some pictures below.


Step 10 - Chis leaves the 1" incision open to allow drainage but puts in a single cross stitch to hold things together.

Step 11 - A spray of blue spray and we are done.  It was amazing how quickly they boys recovered and got on their feet.  We thought we would have to lift Fin into the corner and commence operations with Kenzie, but he soon got himself together and decided he wanted to be outside in the yard.   The picture below shows Fin and Kenzie while Noah was getting done.  Alert and back to themselves minutes after they were having the most horrendous things done to them.


All over in just around and hour. The worst part was the waiting for the vet!

The behavior of Alpacas is the most fascinating thing about them.  The boys watched their mates with concern during the procedure and looked out for each other after the event.  The best example was when Noah came out.  He was unsteady on his feet and Fin moved close to support him and let him rest his head on Fins neck until he was steady.

The boys are locked in the shed /yard tonight, for the first time ever. We wanted them bedding down in the dry and where we had disinfected.  We hung around for a couple of hours to make sure the sedative had worked out of their system before leaving them.  Hourly checks thereafter to dark.  As the pain relief wears off they are obviously not 'comfortable' and there is more mutual humming going on, this is usually just Noah but nothing too serious.  I'll set them free in the morning. 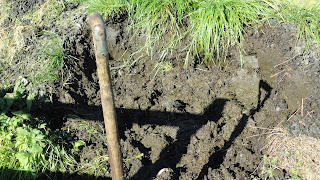 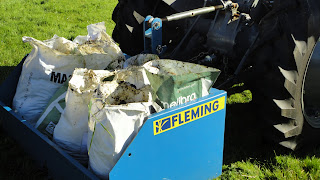 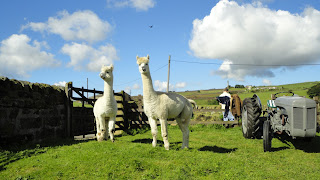 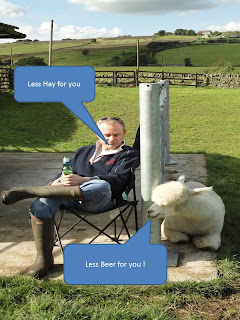