The Home Guard Versus The Big Black Beasties

They arrived in the middle of the night amidst thunderous noise, bright flashing lights and the occasional heavy thud.

The invading force was revealed at dawn to be big, black and scary.  Territory obviously had to be defended.  I don't know how long the boys had been standing guard at the gate when we opened the bedroom curtains, but by the time I got my camera out, 2 hours later, they had obviously decided the attack was not going to be swift, and a seated watch was sufficient - as long as Kenzie blocked the gate with his body.. 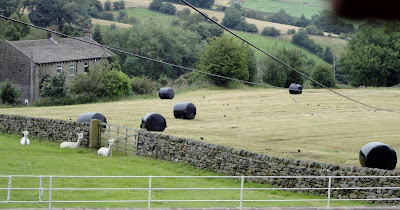 The enemy viewed from the bedroom window,
the Home Guard on duty. 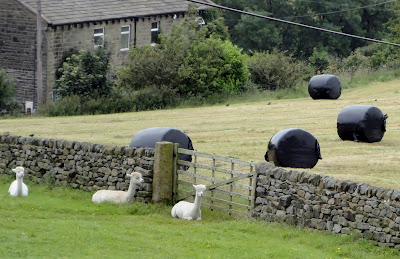 Like any good General Fin sends his best man (Kenzie) forward,
and sends the pacifist (Noah) to guard the rear. ﻿

I don't know how long the boys stayed on duty, but as I left for work I could see that reinforcements had arrived.  Veteran of many a black beastie invasion our neighbour Charlie was picking them off one by one and removing them from the field of battle, like a modern day Monty on his steed of steel.

They may not have scaled the wall and been bloodied in battle but our boys are still my heroes, showing tremendous courage in the face of a massive enemy - this is in stark contrast to a few months ago when they let a pair of swallows drive them from their own barracks, least said about that the better...
Posted by Bev at 12:46