That Time of Year

It's over a year since the boys arrived and it will soon be their 2nd birthdays.  So now we are seasoned Alpaca owners and things will hopefully start repeating themselves, and we will have more confidence this time round and know what to expect as the year unfolds.

Last year as spring came we found the boys all stood looking quizzically at the shed one morning.  They were reticent to come in for their breakfast.  Whats all this about? we asked .  We then discovered that we had trespassers in the shed. The boys didn't quite know what to do about it so decided standing in the paddock was probably for the best.  The trespassers were a pair of Swallows who had begun to make a nest on one of the joists.  The boys were not at all keen to share so we evicted the birds before they got established and all was well.  A year passes (plus a few weeks due to the weather we have been having) we were not surprised to see this. 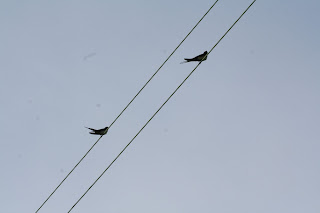 Mr & Mrs Swallow back from their travels

Creatures of habit and tenacious, the swallows remembered the luxury, if not the eviction, and made a bee-line for  the shed.  We were having pangs of guilt about moving them on last year. This year we had something in store for them that may persuade them to seek alternative accommodation.

Meet our newest shed resident and one sure to protect the boys from annoying flapping and coming and going just when they want to chill out. 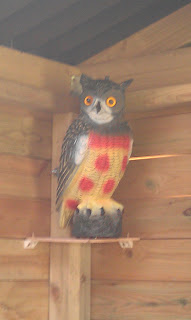 The Swallows have thanked us for this thoughtful provision.  If I am not mistaken they have given up nesting in the rafters.  But I suspect they may have taken to sitting on Mr. Owl's head and pooing down his back instead !  I guess you get what you pay for, Mr Owl cost £4 from ebay.

Spring brought with it a fresh growth of buttercups and Earl was pressed into some real work for a change.  Hopefully regular topping will mean they are less of a problem in coming years without resorting to spraying.  The boys have become too familiar with the tractor so need to be confined during topping operations but watch intently. 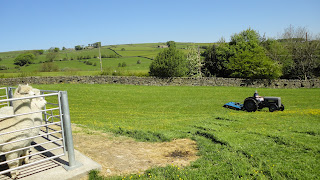 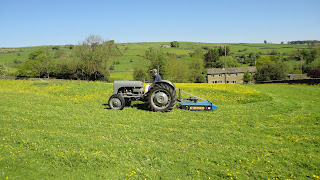 And then it was time for the shearer to arrive. 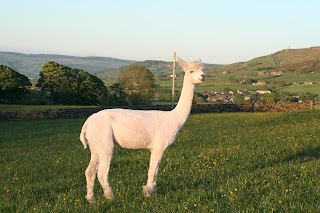 Kenzie was glad to get the weight off.  He is denser and finer than the others and feels the heat.  Most often its Kenzie flat out taking a nap in the sun.  He doesn't really enjoy the shearing experience but keeps his dignity throughout. 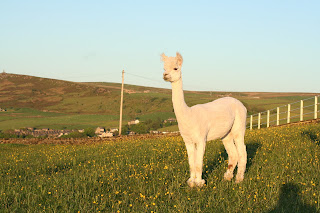 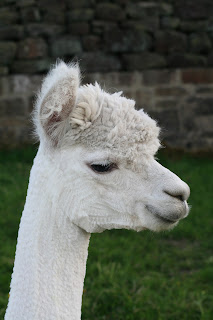 Noah looking regal but the forehead cut was all our own work from a week before.  He really is a teddy bear - Not a murmur of complaint during the process. 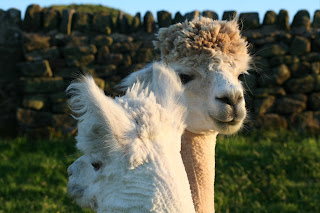 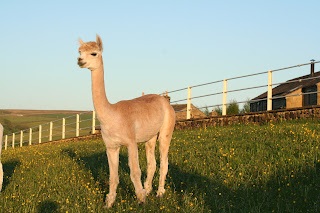 Fin (as last year) called alarm calls, wet himself, spat and wriggled throughout.  But this year was still top man after the event and made sure the others fell into line straight away.  But the results were worth it. 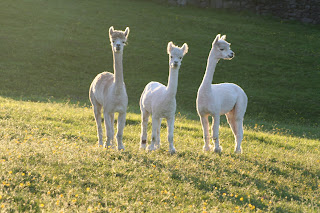