Getting to grips with Kenzie.

Sorry , its a wordy one today ...  So Ill start with a picture to keep you going. 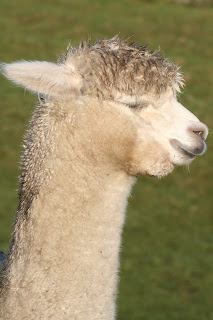 
Arguably our finest boy is Kenzie.  Well certainly if you go on conformation, fleece density and fineness.  He is a very light fawn and carries this down onto his legs with little guard hair to see.  He was a near miss for a career in the show ring and visiting the ladies.  His main detraction being a spot of colour on one side of his neck about the size of a 10p, now almost undetectable in his second fleece.  From my limited experience as steward at a few events last year I certainly think he would have not been embarrassed in any ring, possibly of a standard to be placed well in his class.  But that's not what life had in store for him. Not the life of a libertine for him, not the heady elation of performing in the ring.  Instead an easy life in a beautiful location with a couple of mates.

Kenzie is cut from different cloth from the other two.  Neither are of quite the same standard.  Noah is a little dumpy though carries a lot of lovely white fibre. Fin, while of good stature and a lovely uniform mid fawn, does not quite have the density or fineness. (listen to me - I didn't know anything about this stuff a year ago !). 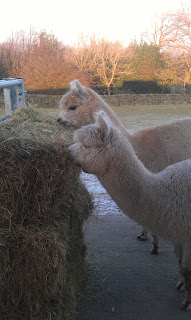 'Dumpy' and 'Pushy' helping themselfs to a new delivery

But I digress.  We didn't start this adventure to build an elite herd, we had a different agenda. Noah and Fin fit right into that agenda.  Where they may lack in some areas they make it up, and more, in other areas.  That is to say in their demeanour.  We do handle them lots and they are exceptionally well socialised. (and they aren't in the least bit berserk !).  This I believe is as much to do with an inherited trait as any other, they are half brothers (same sire) and I believe other offspring are similarly relaxed.

So let me describe a typical visit to the boys.  I'll enter the paddock and the boys, as a group, will be grazing somewhere or will be chilling out in their yard.  One of them will notice but its always Fin who will flip his tail and run towards me.  Noah is his wake.  Kenzie will follow up but as the others will approach me closely he will stay back.  At closer quarters its not unusual that Noah and Fin will indulge in an un-encouraged nudge or a nibble while 'helping' poo pick.  Kenzie won't be too far away but would rather get on with grazing a few meters away.  In the shed you have to shove Fin and Noah out of the way if you want to do anything close by.  Kenzie will however always have an escape route planned and will often make a bolt for the door if anything unexpected happens.

There is nothing 'wrong' with Kenzie.  He's the normal one by all accounts. But all the same, he will flinch if you extend a hand and jump if you reach out to rub his neck thinking he is one of the others.  We have a theory that when his skin problems were at their worst last year he got a little traumatised by frequent injections and that it may actually have been painful to be handled.  Whatever the cause, he is a little too 'flighty' making routine inspections more stressful for him that they need to be.

We don't really walk the boys that much. We only have one paddock and to be honest because we would always want to take all three them I thought that it wasn't worth stressing Kenzie out for the benefit they (we) would get. I am also sensitive to the likely reaction of our farming neighbours and increasing our 'daftness' score.  Nevertheless, today was a halter training day and I must say a bit of a revelation. By the end of it Kenzie was standing quietly for me and I was able to condition score him and run a hand round his jaw without even a murmur.  It seems that the halter gives him confidence or perhaps takes him back to conditioning he got while young ? 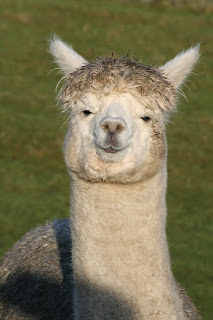 Happy and in fine fettle