As usual its been a feast of food here at Lane House Barn.  Christmas comes around and I am itching to cater for the masses.  This year we managed to get through various mountains of delicacies and local produce. But as we tucked into Goose (raised on a farm across the valley), Pheasant, home cured Salmon, and a fantastic array of smelly cheeses I began to have pangs of guilt about not providing a treat for the boys.

Its hard to know what treat the boys would like, and anyway we have been oscillating between thinking that they are little fatties and too thin for their own good. (Actually I think this means that they are about right).  Apple was settled upon.  After only the occasional treat they now come to expect a little something when we turn up in the paddock and get over excited at the mearest hint of a plastic bag, leading to spitty mouth more often than not.

As the winter has progressed we have been being a little more generous with the supplemental feeds.  Rather than the half a scoop between three in the evening we have moved to more like a just short of a full scoop twice a day.  They are eating copious amounts of hay too (not quite a bale a week). The weather has been atrocious.  It has done nothing but blow a gale of wind and rain for weeks on end.  The paddock is decidedly soggy and the boys are muddy up to their knees half the time, and have a definite grey tinge to their fleeces.  The BAS magazine carried a timely article from Karin Mueller this month about energy needs in the winter and I was not surprised to see that she went into detail about wind-chill.  It has been mild this year but when we say it is windy here we mean it.  None stop gales with gusts over 80 mph on some days.  It even blew the neigbours stone built garage away!  This kind of wind with rain leads to high wind chill so I think we are doing the right thing keeping the food provided.  They still graze the paddock but the grass is looking decidedly poor and they are always nipping back to the shed for a munch of hay, and because it is warm dry and well sheltered in there.

Water water everywhere, but not a drop to drink.  We rarely see the boys drink. But we do see them wee for England, so have not been too concerned.   Last time I took a look in the tanks where we store water harvested from the shed roof it was quite slimey and there was a whiff of sulfor not to my liking.  I have pressure washed the tanks and changed the routine to filling them only when  empty so as to keep them cycling with fresh.  I have also stopped adding cider apple vinger to the tanks, I did this in the belief that this would naturally kill off any microbes (old wifes tale).  Maybe this was the cause of the problem?  Worried that the dry food would increase their water need we have started to carry tap water down to them and we think that they may drink this more often than the water from the tanks, but its hard to tell really.

The lighting system has been working a treat.  I did have to charge the battery once in the deepest darkest mid-winter when we were using the lights a lot and there wasn't much daylight. Perhaps my calculations were a bit out but I think it more to do with temperature, I don't think the panel works well when cold and it was frosty when we ran low.

So time for some pictures.  The boys love to see visitors. Rachel and Billy were amongst the guests for boxing day and they brought with them Jamie, Andrew and Gemma. 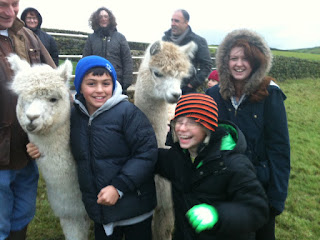 Note the absence of Katie, normally not known to be camera shy.  Whilst our backs were turned she had decided to try out her new scooter on the drive.  Alas the brakes were not applied and minutes after this photo was taken we were off to A&E with a broken leg!  Poor Katie!

Less dramatic was a visit from Chris and Heather.  Chris left a very fine hat for Fin to wear but Fin thought it did not suit him and refused to put it on. 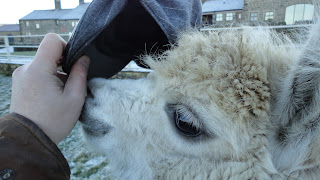 'It wont go over my ears !'
But then Noah had a good idea, its a great way to feed treats ! 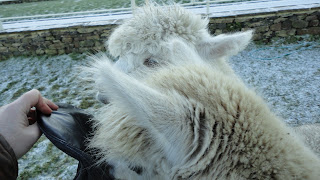 Father Christmas didn't pass us by.  He dropped off a few things in the paddock for Earl the tractor to play with over the comming months. 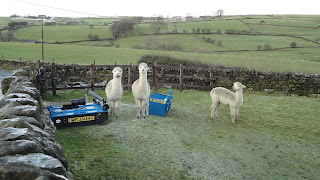 'Dont worry Boss , we will stand guard while you go and get Earl' 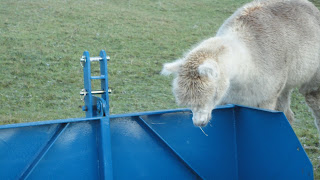 'Whats all this about then ?'
Alas I didn't have the camera to hand when Noah actually got into the link-box !

So whats with the blog title ?  Well that is about our Fleeces.  We sent them off t't mill to be processed but a few weeks later, they came back.  One cone from Fin (100M, 4ply) but two bags of rovings (1.583Kg + 1.445Kg) from Noah and Kenzie .  The rovings were too fine to spin!  So it was either have it mixed with someone else's adult fibre, or have it back to add to next years.  Not sure what Titus Salt would have made of this situation.  I may go and ask him at lunch next week. 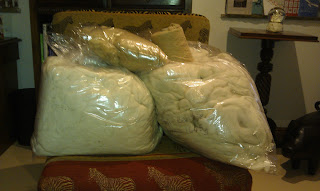 Despite getting all worked up about having a 'Noah' jumper  we will have to wait another year and be content with a hat of finest Fin.  Just as well really, I think that much of Kenzies fleece will have to be discarded this year.  Last years skin problems are resolved but he really did have extensive scabbing and this has come away with the new fleece. I am not sure that will be easy to separate.
Posted by Andrew at 17:50