Its been a while.  I don't know how that happened.  One minute it was summer, the next the nights have drawn in, there is a chill in the air and not a blog in sight ! Happily there have been no dramas to report.  Just good fun with the boys who are happy and healthy.

In preparation for the dark nights.  We devised a lighting system for the shed.  As usual there was a bit of engineering analysis to be done.  I really wanted to avoid carting a car battery around in a barrow and know that whenever you need light then the battery will be run low.  The solution, a solar panel and LED lights.  I'll save you from the calculations on panel output, hours of daylight in these northern climbs, the relative luminosity of different bulbs etc.  It's a success and we can illuminate the shed at the flick of a switch.  Leading to some interesting shots of the boys with 'moody lighting'. Other than a minor addition of lagging to the water pipes- the shed is the shed and performing well. 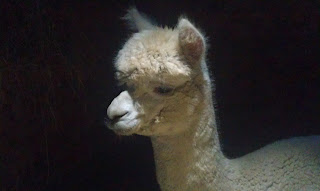 Noah steps into the spotlight
We had been overly lax with the nice new season hay and we still have to divide the paddock so the boys got a score of 'maximum ideal' on the scale in the book.  'Piggy barrels' in my book but they will use it over the winter.

We are members of the local Alpacas Anonymous group - YAG the Yorkshire Alpaca Group.  This has turned out to be a good thing.  YAG hosted a days seminar led by Karin Mueller (See Barbara's blog for more details).  This was great information and great to see our vet Chris there too.  This lead to a couple of plans.  Firstly the dental abscesses that Karin showed were something we would want to avoid.  No reason we have any greater chance than anyone else but the boys do browse a Holly tree so we decided it had to go.  Earl the tractor was called into action and a suitable work party assembled.

Kenzie stands back - He is the biggest Holly muncher and sorry to see his snack tree go
The boys retire to the shed leaving Earl to drag the Holly tree off to the bonfire
The other thing that came out of the YAG was a solution to our problem for treating for  Liver Fluke.  This is a problem for a small heard.  The treatment, Fasinex, has a short shelf life and we would use a tiny fraction of the smallest bottle.  The Solution -  A plea to the YAG members where we found someone in the same boat who was able to share their bottle.  Buying a drenching gun comes next.

With winter coming in our schedule has had a change.  We have had to switch from evening feeds as the boys are settled down in the shed and not too interested in Camelibra by the time we get in from work.  Vitamin paste is on the menu too.  We follow the instructions to the letter.

'Make sure you Alpaca reads the instructions carefully'

'Make sure that they take turns & Share'
We had a great week-end with KT and Ed. 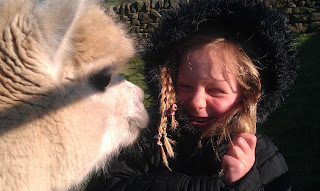 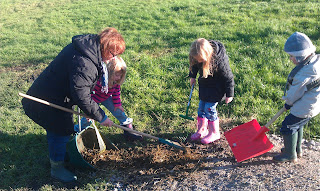 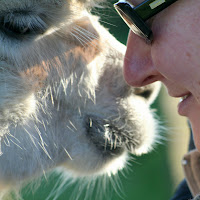 My lovely Fin and Bev together. 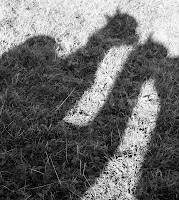