We have been keeping our heads down, and keeping busy.  Hopefully I can cover a lot of ground in a few catch up posts.

To start with we didn't post because when seen beside all the posts of cute little cria and exciting birthings and dramatic events our blog really didn't have much to say. There was just steady progress and we were enjoying the routine of looking after the boys.  Satisfying and enjoyable? Yes.  News worthy? Maybe not.

So perhaps we have not has as many new arrivals as some, and the choice of an all boy herd has been openly discussed but on reflection we are sure we made the right choices and we have had enough to keep us on out toes.

So the first new arrival was our summer herd hand.  Timmy visited us from Texas.  Timmy has always been an 'animal' man enjoying photographs of wild animals and keeping a range of critters, including running an underground Hamster breeding programme.

Timmy got stuck in an had introduced himself to the boys within minutes of arrival. 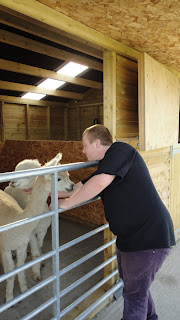 Within a day or two Timmy had taken over our duties.  No nipping out to see how the boys are doing, just ask Timmy, he will have been out there.  Feeding - No problem , Water Bucket - Already done , Hay Bag filling - He even invented a new and improved tieing up regime ! Poo picking however was not really the top of Timmy's list though apparently this is because we never let him do it !

The concrete got pressure washed within an inch of its life. 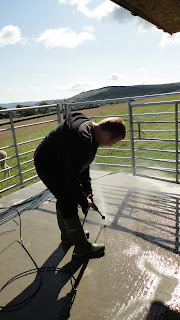 The weather was hot and the boys liked the pressure washing, standing down wind and enjoying the 'mist'. 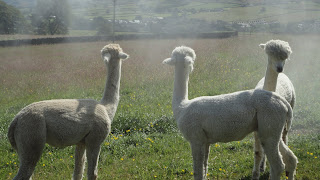 This was so much fun that they asked for more, moving closer and closer.  I know that the advice is that you should not hose down Alpacas and should try to keep their fleece dry but this really was not as dramatic as it looks, they got a lot less moisture than a normal day when the mist rolls in. 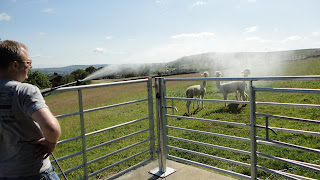 Fun as this was, its not something we intended to make a habit of.  But the weather got hotter, and the boys enjoyment could not be curtailed, so an Alpaca fountain was arranged. 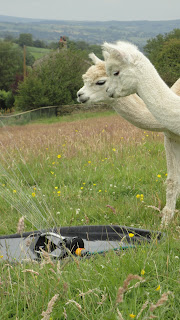 Whats going to happen next Fin ? 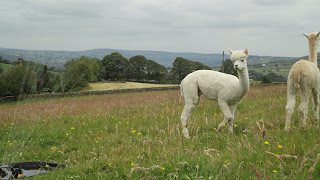 Whooa ! Leg it !
You may remember the bizarre emergency when Kenzie managed to thread his head though the wire of the fence and then back on himself.  The immediate action was to shore up the fence with some 'euro-mesh' -  Thick plastic netting stuff, and boy were we glad we had it to hand when we needed it.  I was in two minds about what to do, after all the fence had been fine up to the incident and I am sure that the combination of Kenzie being thin after his infection, having just been sheared and there being some juicy 'rose-bay willow herb' on the other side of the fence was not likely to be repeated.

But you cant ignore lessons like this and anyway an over enthusiastic observer had managed to break a fence post.  No, really - I was watching ! This guy was so keen to get a look at the boys he crossed the verge , jumped the 3' the ditch, scaled the rubble remains of an old dry stone wall and levered himself up using my fence post !  Snap !  So after considerable research on wire and hole size and stuff like 'high-tensile'  I got 100 meters of the right stuff.  Timmy was press ganged again into being a 'wire-wrangler' and a 'post-wacker'.  The result .. 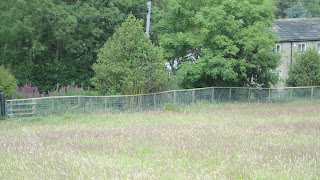 re-secured fence with a more aesthetic finish than 'euro-mesh'.
Note the length of the grass.. more on that to follow.
Posted by Andrew at 00:12