It's unnecessary, it's extravagant, its Earl !

I saw an Alpaca breeder somewhere called 'Why Not'.  Indeed, why not?  We need no justification, we owe no explanation to anyone and anyway we can do as we please in a free country.  Besides, we have the land to maintain and the grass needs to be eaten.  That's it, the land.  We have a responsibility as stewards of the countryside to keep the grass eaten. In fact it would be downright irresponsible not to have Alpacas as without them, the grass would grow and grow and the countryside would disappear.

So goes the theory.  We were worried that we may not have enough grass and we would have to improve the pasture to keep the boys fueled.  In fact the converse is true.  We need to employ the services of either (a) More Alpacas (b) A suitable mowing solution (c) Some combination of both (a) and (b) !

This summer we have asked on several occasions for the farmer down the road to top the paddock.  He does a grand job, and does it willingly, and his topper is a tip-top topper.  But there are those other little jobs, and it would be nice to be able to top a little more often to chop off the buttercup and stop it speading further.

I was lent a small ride-on last summer and managed to leave it gasping with the length of the grass and my weight.  After that I decided that really they were not up to the job as the paddock is a large area and has quite a slope on it.

The solution .. Let me introduce Earl. 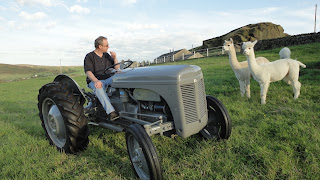 Whatcha think boys ?
Earl is a 1950 Ferguson TE-A 20.  AKA a little Grey Fergy and so named as we are both Earl Grey Te-a addicts.
Small enough to get round the paddock and not be too much in the way when parked, Powerful enough to run a small topper, possible to borrow other implements for a proper tractor (Harrow, Roller etc). Possible, with some minor form filling, to make road-legal.
Let me let you into a secret.  If you want a new tractor, buy a vintage one.  Earl cost a lot less than a 'modern' 2nd hand tractor, or even a beat-up ride-on come to that, but has just about new everything.  New paint, new engine bits, new tyres, new oil.  Not that I was around 60 years ago, but I imagine he drives better than when he came out of the factory. The guy who restored him put in a lot of hours - I mean a lot - that simply are not reflected in the going rate.
Not only that - but as a design classic, and not too big, Earl is fun for the whole family. 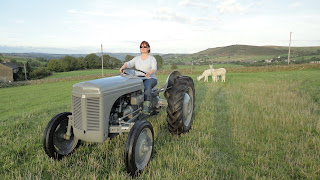