Noah - Walks on the wild side

Our thoughts have turned to matters nutritional.

Working on the 'what comes out must have gone in' principal they would seem to be eating their fair share of grass. I am not sure what we should expect but a hefty bucket a day between 3 of them on the output side seems fair enough to me. On top of this they have a scattering of Fibregest and Carrs twice a day and hay from nets if they want it (a lite snack on wet mornings).

Of course volume isn't everything and the paddock is more 'rough grazing' than 'lush lawn'. I have noticed the boys quite like to browse in the scrub around the building works for the shed and they do like to suck on the galvanised fittings. Why was Kenzie so keen to stick his head through the fence ?  I thought that maybe they were seeking some minerals not present in the grass.

We have not, as yet, gone to the lengths of a soil analysis to tune the drenching regime. I am not sure if this is really needed for a bachelor herd. But as the boys have had a bit of a roller-coaster over the past month I wanted to make sure that they had what they needed. So ..

1) On to the Internet to procure a supply if vitamin gel.
2) While we were at it, we bought a bucket of mineral goo for the boys.

The vitamins slipped down as a digestive would in a fine dining restaurant. In fact, I once had a little chef's 'amuse' that smelled and looked quite similar, the cost was probably the same too, low volume Alpaca meds and Michelin star menus seem to be on a par !

The bucket of goo wasn't a bucket of goo when it arrived. It was a a nice neat bucket and not really even all that sticky. The instructions lead me to believe that all things good are set solid in a handy to deploy format. All one has to do is rip the top off and put it out anywhere in the paddock for happy and newly invigorated Alpacas. We are advised not to worry about the rain, the Alpacas will gleefully drink the water off the top. Well, what actually happens is that a thick brown goo of molasses is formed.  Yes, they may well enjoy this, but they will also enjoy getting it on the concrete, the gates, themselves and each other and their owners.  Let's hope it is doing them good.


Poor Noah had us creased up laughing when we went to feed the boys this evening.  I swear he was wearing lipstick ! 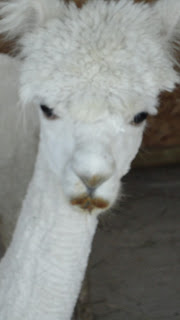 Its been a while.  But we have been a little distracted.  Hands up those of you who thought this Alpaca lark was as simple as getting hold of some Alpacas, putting them in your field and inviting some cute kids round to look at them ?  Actually, knowing the followers of this blog by now I am guessing not many hands went up.  Let's just say that's not exactly how it is all the time.  We didn't think it would be all blue sky and fun, but the past couple of weeks has been full to say the least..

So lets start where we left off.  The usual crop of pictures depicting happy people and cute Alpacas.  First there were visits from the, shall we say, "chronologically blessed". 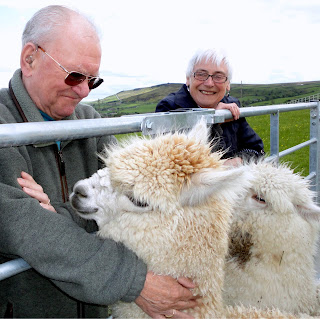 Len and Fin debate the relative merit of Amontillado & Fino
OK, OK ! Now it is time for cute kids and cuddly teddy-bear Alpaca. 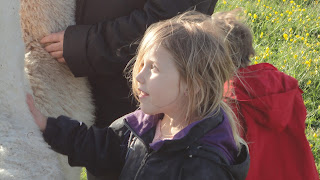 Here we have Una on a visit from Norway visiting Nikki and Ben.  (Reminder to self .. google Alpacas in Norway, I bet they would like it there).  Una was pleased to meet the boys and the boys pleased to meet her. 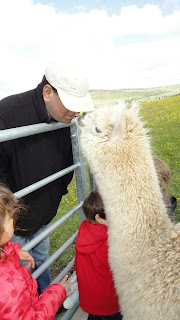 Rahul is the leader in paddock style
Where did you get that hat? Asks Fin.
Then the fun began.  Quite a hectic period as you will find out.  One day we noticed that Kenzie was a little under the weather and on closer examination we decided perhaps he needed a bit of attention.  Time to get acquainted with the vet, a job that has been on the board for a while, as a 'just in case', moved up the list.
Noah was also acting a little bit strange.  Well, he has always been a little bit strange (e.g. falling into an ecstatic trance when having his beard stroked). But this time we noticed that he had a 'droopy ear'.  We monitored it closely and within a day it was obvious he had developed an abscess.  The vet was summoned poste-haste and then began a course of antibiotics for him and Kenzie who had managed to get some infection into a wound on his leg.  As part of our relationship with Beck Brow before the boys arrived we visited a number of times to get used to handling and basic care procedures (including injections and the like).  As it turns out, this was an essential bit of training but even with this, doing it for 'real' with 'our' boys was still a little fraught and as those of you who handle animals will know, this rubs off and makes the job harder still.

Meanwhile, time to tend to some pasture maintenance. We have a higher than we would liked coverage of creeping butter-cup in the paddock and had previously bought some agro-chemical strength selective weed-killer. What with the dire health warnings on the bottle, our initially inadequate solution for dividing the paddock and the fact that we live in a somewhat breezy locale we have decided to try an manage the problem more organically - That is to say regular topping to give the grass more of a chance.  I am sure we are doing the right thing here.

And then to the sheering.  Those of a scientific bent will know that the travelling salesman problem (TSP) is a hard / impossible problem in combinatorial optimization that is studied in operations research and theoretical computer science.  When the super computers of Cambridge and Harvard have nothing better to do they churn away trying to find the most efficient algorithm to solve this age old teaser.  I now find out that this problem is in-fact trivial in comparison to the Itinerant Camilid Shearer Problem (ICSP).  It has all the parameters of the TSP but adds factors for weather, availability of indoor facility, herd size, show schedule, time of season and availability of chocolate cake.  Ben, our man, turned up just at the right time, dodged the rain and, after a suitable slice of cake and a cup of tea, set up to relieve the boys of their burden.  Ben's solution to the ICSP seems to be to load a pick up with everything to hand including three dogs the kitchen sink and a mate and then to drive in a pseudo random pattern around the British Isles sheering anything vaguely camel like that he may encounter.  It seems to work for him, it certainly worked for us.

We were a little apprehensive about the whole shearing thing.  We had seen the YouTube shots and read the books.  But really it was so well executed that it wasn't too much of a trauma for the boys or us.  Ben was very knowledgeable and helpful and we were able to get acquainted with the boys in ways you really just can't if they are not restrained in quite the same way. True to form the boys showed their true characters during the operation. Noah, first up, laid back and thought of England, or Peru, or whereever it it that he goes to in his mind.  Fin thought that it was the biggest indignity ever and let everyone know. Kenzie managed to keep his dignity as befits one so high-born. 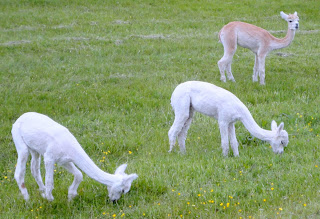 All done !
Well, when we say 'All done' not quite.  The Paddock is enclosed 80% dry stone wall, 20% by a fence that we prepared for Alpaca use by removing the barbed wire and fitting a top-rail.  I regularly walk the boundry making sure that I get all the brambles, sticks , bits and pieces and making sure everything is safe.  Imagine my suprise when I got home to find out there had been an incident.  Kenzie had managed to get his shawn head though one of the 5" squares of wire.  Not one time but twice !  He had threaded his head though the fence and back on himself.  Thankfully he was noticed and rescued without too much injury but it has shaken him, and us.  Needless to say the fence was made safe immediatly.
The take away from all of this.  People are fantastic.  Una and her mum were lovely guests.  Len and my Mum are great, the topping man topped at the drop of a hat, Barbara and Paul have been rocks as we wibble, the Vet is a great find and a reasuring presence, the watchful neighbours are fantatic, Ben and his mate made it all work.  To put it all into context, laying on my back under blue skys on Saturday I did have a bit of fun that made it all worthwhile. 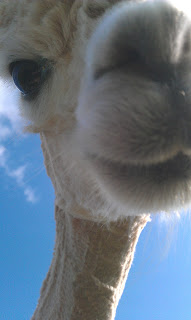