Well I never expected that

When we set up this blog I said it was to record the impact of alpaca ownership on our lives.  Well two months have passed, and it's time for a review, so I thought I'd relate some of the things that have taken me by surprise.

Things like farting, I never expected that.  I mean if someone had told me alpacas fart I wouldn't have been surprised, after all they are animals, vegetarian animals, and ours are all male, seems only natural.  But I was unprepared for the first fart, or for the quantity to follow or for the volume or the frequency.  I now know to get out of the way when Noah goes to scratch his tummy with a back foot.  And if we both happen to be in the confines of the shelter it's time for me to head out. 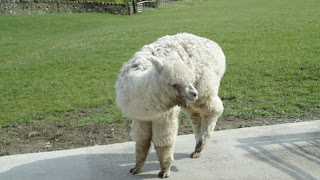 Fart Warning
﻿
I never expected to get attached to the boys so quickly and so completely, and to see them as such individual personalities.  I must confess that when Andy and I went to see the boys at Beck Brow we couldn't always pick them out of the pack of cria, and there were only 8 or 9 to choose from.  But as soon as they arrived we could see how different they are, and just the other day we were saying that now we can even recognise them from behind!  Of course it helps that Fin is fawn, but Noah is the short wide one, and Kenz is - well actually I suppose he's just 'non of the above' - from behind anyway. 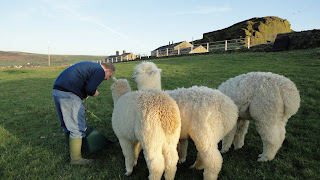 Andy, Fin, Noh and Kenzie - nice bums boys
I really didn't expect to worry about them so much, and I never expected Andy to worry as much as he does.  Whenever Kenzie sits down Andy thinks something must be wrong, and if he tries to have a snooze Andy goes over to make sure he's not not expired.  Poor Kenzie likes to maintain some distance, his own personal space, so Andy's approach means the poor boy has to get up and move to another spot for a snooze.  At least this movement reassures Andy, momentarily anyway. 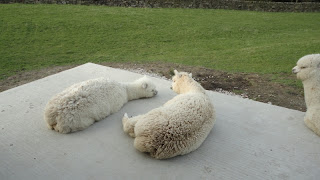 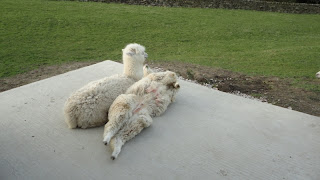 Nah, Fin has his own way of checking

Then there's the horseplay, alpacaplay?, play fighting, ankle biting and general mutual pestering, any of which can sometimes lead to spitting, sometimes nose to nose, very unpleasant to watch, and it all ends in horrid dribbling lips..  Is that just immature boys being boys? sorting out the pecking order? 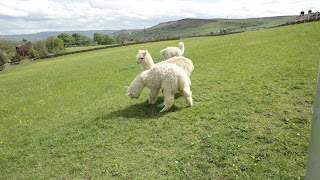 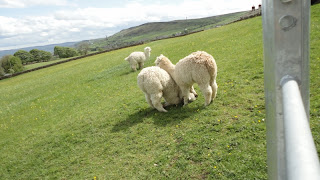 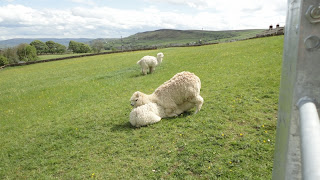 Fin having none of it 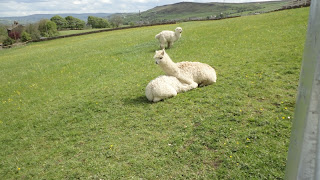 Get out of that then 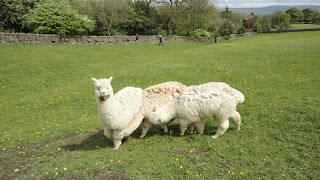 Three way ankle biting
﻿
I have a theory that they are trying to bite each others ankles, and they all do it, because it's the only place the fleece is thin enough to make contact.  So I'm wondering what is going to happen when they've been shorn in a couple of weeks, it could all end in tears.

At the other end of the scale there's lots of kissing and ear nuzzling and complicated 3 way neck entwining and a great deal of time spent just sitting together companionably.  I never expected I could watch for hours, and my favourite moment from the last two months was when they were all dashing all over the field one evening full of joy and bouncing along heads held high in a strange four feet off the ground prance, like some cartoon character I can't quite recall.  I guess those who've seen it could tell me if that's what they call pronking, and those who are cartoon fanatics could tell me which cartoon character I mean..

One of the least expected things is how I've taken to being outdoors so much.  Andy's favourite description of me is "Bev doesn't really do outdoors", and I definitely don't do rain.  But now you can see me rain or shine out with the boys, though I may be wearing 5 layers and looking like the Michelin man.  My headgear is very embarrassing, and it ruins the blow dry, it consists of a felt hat pulled down over my ears, the hood of my fleece over that to keep it in place in the wind, and the hood of my quilted coat on top of that to keep me dry.  Barbara was once daft enough to call me stylish, well now look what she's done to me.. 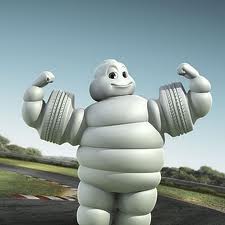 You didn't really think I'd let myself be photographed
The final thing is poo, so much of it, that was unexpected, we may need to expand our midden area, or pile it much higher.  But even more unexpected is how I've taken to poo picking - because I'm not normally very comfortable with dirt - but I do wear gloves, and how satisfying it is to have a nice clean field after the evening's poo picking.  Fin likes to 'help', and when I bend over to rake poo he gives me a kiss on the top of my head, at least that's what I think he's doing, hard to tell through 3 layers.  Noah likes to stand right in front of me, protecting the poo I'm trying to pick? Hard to tell with Noah - he's my adored baby of the herd, but I have to say he's a simple soul, really as daft as a brush.  Mind you he's the only one who's been seen to poo in the poo collection bucket for us, good boy.

Finally finally, I'm surprised to be contemplating spending the obscene amount of money it costs to buy new wellies these days.  The wellies I've been wearing are at least 25 years old, they aren't worn out yet, but they are so perished that they will no longer stand up on their own, making them very difficult to get on.  I bought them for an Eric Clapton concert in a park somewhere long forgotten, in those days there were no 'festival' wellies, only black or green wellies.  How do you make a pair of wellies last 25years?  it's easy if you don't really do outdoors.  I may offer them to Hunters for their museum, or maybe for their marketing department - 'Hunter wellies are cheaper than you think, you can spread the cost over 25 years' 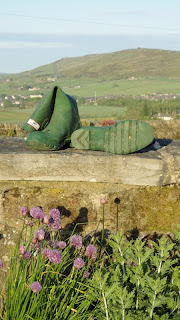