Alpacas, have been in the background of my life for the past 10 years or so.  I used to work in Salts Mill, Saltaire.  Totally ignorant of what this place was and what it was founded on when I moved to take up a job I started to notice a few odd things.  What was that strange Animal carved into the keystone ?  Why is there a Llama thingy in the stained glass at work ?  What was this vast mill used for ? - I will save you the detail for now save to say both Bev and Myself work in Saltaire, a town that was built on the back of Alpacas (there is more to come on this later).

Sitting in my office last week, one of my colleagues popped into the office and said - Is that one of yours outside ? 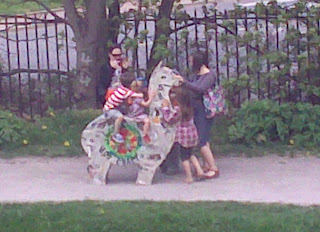 No, not an escape.  Saltaire village was running a special event to celebrate the Alpacas contribution of this world heritage site. My office looks onto the tow-path and for some reason this was what I saw.  Perhaps next year we will have the required trailer, etc etc to join in with the real thing... who knows.


Kenzie has changed his demeanour. Could it be that the extra time we have spent with the boys over the past weeks has socialised him a little more ? Could it be that Barbara and Paul's visit reminded him of times past ? Perhaps its our confidence that has increased ? Whatever, it was he has spend some time getting just that little bit closer and letting us get a touch every now and then. You need to plan things a little and make your move confidently, but  he is really very obliging when we need to handle him.  This weeks halter training was less of a tug-o-war than we feared. 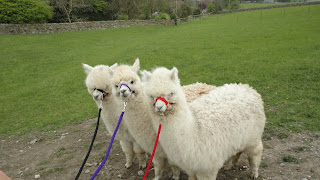 The boys - Post halter training - This week the paddock - Next ?
We had noticed that as well as being somewhat more reserved than the others, Kenzie has some other behaviours that were different.  For instance standing facing us and lifting his head to 'sniff the air'.  What could this mean ?  Is it a bid for dominance ?  Is he sensing danger ? Do my wellie socks smell bad ?  Or, just perhaps you have noticed the problem in the picture above ?  His fleece has grown over his eyes and  had to lift his head so see out.  Out with the scissors today to give time a bit of a trim. 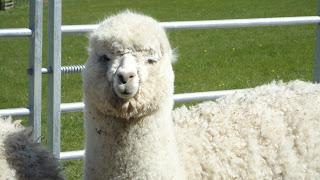 The result is that Kenzie can now see out, but has been left with a look I have not seen since I lived in South Florida where over enthusiastic plastic surgeons would leave people of a certain age with a look of permanent astonishment.  Poor Kenzie - We will get better at this, promise.
Posted by Andrew at 00:22