The boys have really settled down.  Of course we humans remain concerned about every little detail.  Is the poo of the right shape, consistency and volume? (yes) Is that bit of stuff in the corner of Noah's eye a matter of concern (no). Will Kenzie ever want a cuddle? (probably - but not for a while). Do they drink enough? (well they know how to use the bucket).....  I could go on but I will spare you


More visitors this weekend.  First there were the Mehras. 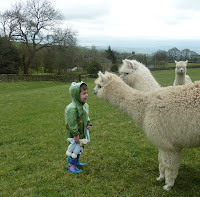 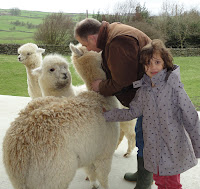 Nikki - Nice and Warm - Better than gloves ?
And then the Stephensons.  Anabelle really took to the boys, no worries here and the feeling was reciprocated.  Fin taking a shine and offering kisses, a treat only usually reserved for Bev. 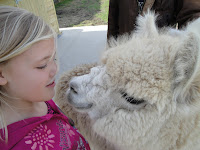 Annabelle and Fin - Could Fin be a Hannah Montana fan too ?

And then the Llama man commeth.  We have heard rumours of a local Llama, but never quite set eyes on it ourselves.  We were busy deciding how to cordon off the midden when a passing tractor screeched to a halt and reversed up the lane.  Much chat over the drystone wall was to be had.  Of course the boys were attentive, if a little distracted by the harrowing going on next door (one more worry to add to the list - are we delinquent in our paddock care for not harrowing?).

It turns out that the Llama has an interesting story.  It  was walking down the road one day, decided it liked the neighbourhood and installed itself. That was 10 years ago. Though untamed it sounds like the Llama has carved a place in the hearts of the family caring for it and has earned respect as a useful farm guard.  There were tales of escapes and re-capture dramas that spurred us on to try out a spot of halter training.  OK for Fin and Noah - but we were not quite up to cornering Kenzie without the gates, but he joined us on our ramble round just the same.  Gate delivery and fitting next week.
Posted by Andrew at 22:46