The following was written mid week, but I forgot to publish it...

After skiving off down to the Futurity on Saturday we made enough progress with our final preparations on Sunday to confirm that the delivery of our three boys will be next Sunday afternoon.  It's exciting, we're both looking forward enormously to seeing alpacas in our field and getting to know them.  So why are we both a bit trepidatious?  I think it's because despite the reading, the research, the preparation and loads of help from Barbara and Paul, and all the lovely alpaca people we've met, there is still so much we don't know.

For example there's the hay or haylage debate.  We know from various blogs that both are used, but which, and why?  We can get both from neighbouring farmers, and we've arranged a couple of bales of hay to start with.  But we would be interested to know peoples experience and opinions.

The other question in my mind is how do we stop the boys eating too much grass?  We've planned for strip grazing by buying electric fence posts and tape (not electrified) so that we can divide the field with moveable fencing - but how good is our grass, there are a lot of buttercups in there in the summer.  Hopefully on Sunday Barbara and Paul will be able to advise on how big a grazing strip should be, but it may be that only a couple of seasons experience will tell.  I know we will be monitoring the boys carefully.

Other final preparations include - finishing shelter partitioning and finishing water collection and pumping station (no really, Andy's background is engineering and if a technical drawing can be introduced ... I'm intrigued by the self filling drinking trough, planned but not yet acquired). 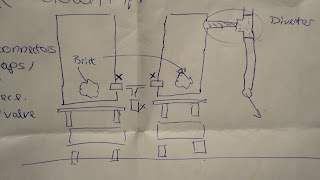 Waterworks Plan
One of the most important preparations will be a nice lunch for Paul and Barbara on Sunday.  It's a two hour drive from Beck Brow, half of that is on A roads through the Dales and the tourist traffic is already building.  They will deserve something refreshing when they arrive, and maybe something sparkling for a special day. 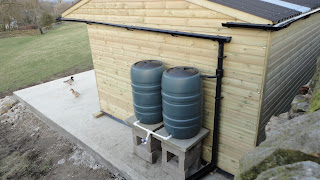 There is hay on a pallet, and in nets, feed storage bins, buckets and poo picking tools. The whole place has been tidied and swept and the only thing we have to do tomorrow is put down the bedding.  Just as we were admiring our work two wild ducks landed in the field a short distance away.  As we walked back to the house we spied them sneaking towards the shelter.  Ten minutes later when we got back with the camera they had actually moved in. 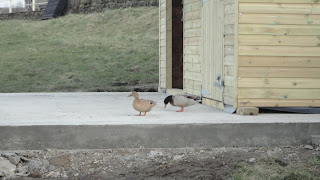 Mr and Mrs Mallard having inspected the internal accommodations settle down on the nice warm concrete to watch the sun set.﻿  You can't blame them, such a nice little empty nest, but not for long guys.
Posted by Bev at 22:19